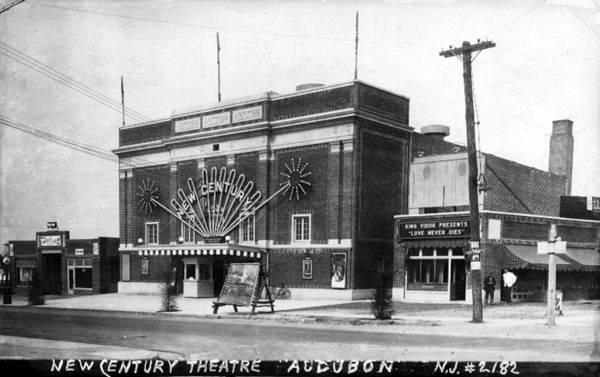 The New Century Theatre opened on October 10, 1921, many vaudeville acts entertained on the stage, and later films were shown.

The theatre closed briefly in the 1960’s, and re-opened as the Coronet Theatre, showing first run movies on April 10, 1968. A local movie chain bought it, then closed it in 1979.

The Campbell family (owner’s of Capa’s costumes and theatrical supplies) purchased the buiding in 1979. Music acts like Rick Springfield and Dexy’s Midnight Runners played there.

The Campbells formed a professional theatre company, and a theatre school. Outstanding students were sometimes invited to perform in the professional productions. The theatre school was unusual, in that all phases of the school (dance, music, drama, art) participated in an original show at the end of the school year. The director and drama teacher was Richard Snee (who has gone on to produce the critically acclaimed children’s CD’s Mother Goose Rocks), his show “Musical Mother Goose” had its premiere at the Century Theatre.

As you might have guessed, I was one of those lucky students who experienced the magic of the Century Theatre. From 1980 to 1985.

The theatre was a beauty, 1,578 seats, a balcony, cavernous stage space, and a history that you could feel in the air.

The Campbells closed the theatre and the school in 1985. Sadly, the theatre became a storage space for Capa’s costumes. I drove by there last month, and found the theatre partially demolished; just the stage still standing amidst piles of rubble. I read later that a chain drugstore is being built there, and that they are renting the space.

the worst bit of all this is that the eckerd is now empty,and has been for over a year. AND NOW WALGREENS IS SET TO DESTROY THE HARWAN!!!!IT IS NEARLY FINAL.

i’m hoping to start some kind of campaign so it does not got the way of the Century….please email me if you can help! there is a mt. ephraim borough meeting august 3, if you can’t attend that contact me for a letter that you can send to the town officials, walgreens, courier, cc historical society (i’m still looking into that one?!) and other people who might be able to help it. surfenkitten @ yahoo.com THANK YOU

You might want to try to contact Mr. Allen F. Hauss, who has just authored “South Jersey Theatres” (Arkadia Press). I left more information on him and his book at the Warner/Warren (Atlantic City) site yesterday on here. Unfortunately, I dont have all my notes in front of me. But check the Warner/Warren site…I think I may have put more accurate info on there. Mr. Hauss, as i believe, is an acquaintance of the people who had started to renovate/reopen the Harwan, and may be involved with the Broadway in Pitman. Let us know, please.

Just goes to show the pea-brained mentality of the idiots we elect to represent us as a so-called government. These poor excuses for human beings allowed the building to be torn down to build an Eckards drug store. ( Keep in mind now there was already a CVS right across the street !!! ) The Eckards lasted less then a year before they abandond the site. So now instead of having a piece of American history they have a white elephany of a building that no one wants or needs. GREAT JOB CIY OFFICALS !!!! Hope you morons are never in charge of my city….

I can’t tell you how many times my mother and I drove by this theater on the way to Philly. This would be circa 1968 to 1977, so I believe the theater was still showing movies at that time. Here is one the of the Arcadia photos as discussed above:
http://tinyurl.com/2p2ju5

Everytime I pass the now empty Eckerd, I shake my head. I remember when Tina Turner, Dexy’s Midnight Runners, and Rick Springfield played the Century in the early 80s.

I loved this theatre. My aunt and uncle lived practically across the street from the Century. I recall in 1952 visiting them and watching the traveling lights on the theatre’s marquee advertising a Martin & Lewis feature. I saw “Tonka” starring Sal Mineo ar this theatre. They played many Disney films here as well as many of the campy AIP features of the late 50s. Coming attractions with “Tonka” included the “Brain from Planet Aros”. They also had “How to Make A Monster”, Teenage Caveman" and “The Spider” at
this theatre among many other teenage fav AIP
features. It was a fun theatre and well maintained
(at least in the late 50s).

I remember in the 1950’s going to the Century on a Saturday for .25 cents. Admission got you a feature film, usually John Wayne, and 25 cartoons. It was an adventure trying to sneak in through the side door and purchasing candy from Bulks Pharmacy next door and getting it past the Manager who lived on Princeton Road.

And now the drug store property has been vacant for a couple years. Good job, Audubon!