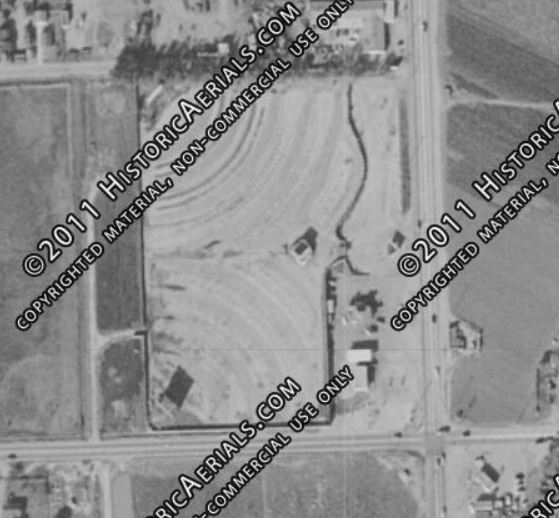 This was a drive-in located in Los Angeles, near Gardena, CA. It opened on July 15, 1949. Technically, there were two screens in the one lot, but only one was used to exhibit films. If I recall, it was operated by Fox West Coast Theatres. The lot was fairly small.

I was here once, on a Saturday night, to see “Up The Down Staircase” plus “Hotel”. I remember the lot was pretty full and felt cramped, with little space between the rows of cars. I had seen the same double feature at the Paradise Theatre in Westchester a few weeks before seeing it at the Twin Vue Drive-In.

The Twin-Vue Drive-In was closed on October 1, 1981 with David Naughton in “An American Werewolf in London” & Linda Blair in “Hell Night”.

As a child during the early 60’s my dad would take the family to the drive-in on Friday’s after he came home from work and got cleaned up. The Twin Vue was one of those drive-in’s that I remember fondly. Some of the films I remember seeing there were Pollyanna and Flipper. Years later after joing the projectionist Local 150 I learned that the projectionist who first opened the Twin Vue also closed it. I also learned that because of the small and somewhat narrow lot, the Twin Vue was configured in such a way that the main screen tower was placed in the northwest corner of the lot and faced southeast so the headlight glare from the northbound Harbor freeway traffic would not be distracting to the audience had it been placed in the southwest corner but later a second smaller screen tower was positioned in the southwest corner of the lot along with car stalls and speaker poles. Most of the time it sat there unused. Only on those rare occasions when the main lot filled up did management open the smaller lot and ran the same picture on both screens using an inovative prism mirror system contained in a box in front of the lens of each of the two projectors that were facing the main screen tower. With the turn of a knob on the top of each box the same image could be simutaneoulsy thrown on both screens. However, this reduced the footlambert and the image lost some brightness on both screens. After too many complaints and refunds about the poor picture quality management stopped doing this. Now when the main lot filled up the second lot opened but arriving customers were told to park their cars so that it faced the main screen.

It’s an industrial park. No trace of the drive-in.

Here is an October 1974 double feature, as advertised in the LA Times:
http://tinyurl.com/3ayogh

Here is another ad from the LA Times:
http://tinyurl.com/5v5n97

You can see aerial views from a few different decades by entering the theater address on this site:
View link

I worked at the Twin-Vue in 1963-1965, when it was owned by the Glenny family, who also owned the liquor store and lounge next door. Busy nights meant trying to guide cars facing northwest into stalls facing southwest. We ushers made spare change by washing windshields for tips before the show started. Also, since we charged by the person while the nearby Roadium charged by the car, there were always a few cars who left the entry line with multiple passengers – only to appear moments later with only one or two people, and a pronounced lower ride toward the rear.

This site has a Gardena post office address, so the 90248 plant handles any mail there. But it’s not in Gardena, or even all that close.

A 1939 topo map shows the future Twin-Vue completely within the half-mile wide arm of Los Angeles that reaches south to San Pedro. It’s on the eastern edge of the arm, making it about a half-mile away from Gardena. Ditto for the 1952 & 1957 topo maps. The 1965 map (the first to indicate the drive-in) carves out the Twin-Vue to Los Angeles County, albeit surrounded on three sides by the city of LA’s peninsula. Ditto 1975 & 1982.

The current City of Gardena’s presumably official City Boundaries Map concurs for the most part. It shows the old drive-in site completely within the LA peninsula at its eastern edge.

Either the Twin-Vue was in Los Angeles, or it was on county land bordering Los Angeles. When I write about the drive-in, LA is the city I’ll be using for its location.

After digging through the LA Times, I think the Twin Vue’s final appearance in the Pacific Theatres' ad was on Thursday, Oct. 1, 1981. The double feature that night was “American Werewolf in London” and “Hell Night”.