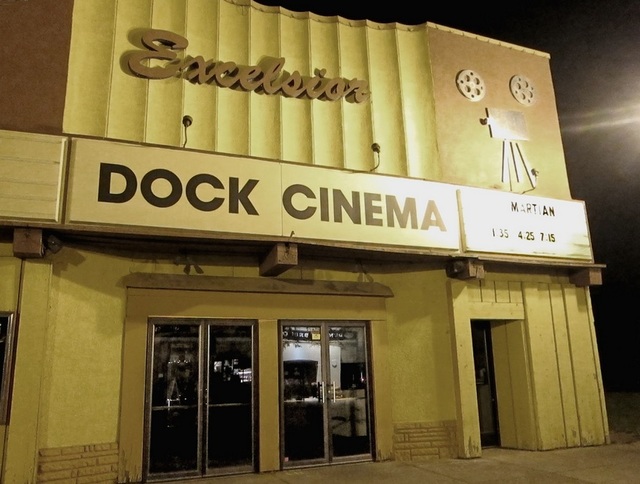 Built near the shores of Lake Minnetonka, in downtown Excelsior, the Tonka Theater opened April 26, 1940 with “Meet Dr. Christian”. It was a small 500-seat theatre but had an elegant Streamline-style whose auditorium was decorated with murals of steamboats on the nearby lake. Just three years later, however, the Tonka Theater was gutted by a fire. It took an appeal to the War Production Board, as this occurred during World War II, and there were strict regulations on building materials. As it was the town’s sole movie house, the owners of the Tonka Theater were allowed to rebuild, and during the summer of 1945, it was reopened.

The theater remains a popular destination, screening a mix of first-run, art and foreign features.

This is an excellent movie house, and the upstairs screen has a great “stage” appearance between the audiance and the screen, with an old wooden barrel and an old heavy rope for decorations. They don’t, however detract attention from the movie you’re watching. The upstairs screen does have a short supply of seating however, but is in “stadium” style seating.

The main downstairs screen has (or had until recently?) a heavy red curtain which was down, before the movie begins, and is raised at the start of the opening previews. Great old style!

The new screen, off to the left, downstairs, is your basic movie screen theater. It doesn’t have stadium seating, but like the main downstairs screen, it offers a decent slope in the placement of the chairs.

I grew up watching movies in this theather, and have enjoyed the fact that the cost for viewing movies here is a LOT less than most movie theaters around the twin cities.

As a child, I recall going to movies at the Dock Theater (then called “The Dock 1 & 2”) Back then, they had movies that had been out for some time, but they only charged $1.50 when every other movie theater in the area was charging $4.50. Even now, their New Releases are much cheaper than the $8.50 you will be charged for new releases at other theaters.

Love the Excelsior Dock Cinema! I live so close to it about 5 minutes away. I enjoy going to the movies there as it brings be back in time. I would go to a small town called Lodi, Wisconsin every summer when I was a child and so enjoyed the small town downtown theatre. The Excelsior Dock so reminds me of that theatre. I love that the theatre has not been modernized and still keeps its old time flavour. The movies are less expensive that most theatres and the popcorn is great!! Another plus is right across the street is a great ice cream store and a coffee shop where you can go after you attend a great movie experience. Enjoy!

There is a photo circa 2006 on this page. Click on the photo to expand:
http://tinyurl.com/9ufvx3

I had not been to the Dock in decades and my son and I attended the “Hostiles” movie yesterday afternoon and it was showing in the upstairs theater. What a treat it was as we were the only patrons and arrived early to look at the 70mm projector on display on the stage. Love the theater and the intimate setup — almost like a big living room with a big screen. Told the ticket/concession employee how much we enjoyed the theater and that we will definitely be back soon!

1950 postcard added via John Michael Wilkinson‎. Tonka can be seen on the marquee overhang when enlarged.