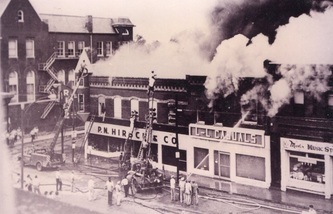 The year 1927 was important in movie history. In Hollywood, Warner Brothers released the first talkie feature movie, “The Jazz Singer”. That same year, about 65 miles to the south of St. Louis in Farmington was when work began on its new showplace, the Ritz Theatre with 1,000 seats, served Farmington’s metropolitan area of approximately 3,000. George Karsch owned the theatre for two decades before selling his chain of eight area movie houses, including the Ritz Theatre, to Tom Edwards and Harold Harriss, the latter who soon sold his share of the partnership to Frank Plumlee. With these new owners, the Ritz Theatre would be the flagship of the Edward & Plumlee theater group.

Work began on the Ritz Theatre in 1927 soon after its predecessor, the Monarch Theatre, located across the street (which is now the location of the Ozarks Federal Savings & Loan parking lot) was destroyed by fire. From the start, the Ritz Theatre was intended to be the showplace for this part of the state. In addition to its unusually large seating capacity, the new building featured a 65-foot wide stage along with an orchestra pit, dressing rooms below the stage for vaudeville actors, and a large loft above the stage from which scenery could be lowered. In 1939 a Hammond organ was installed for live music performances following the showing of feature films on Thursday and Sunday nights. In 1935 the theatre’s large sign, featuring a running string of electric lights, was installed over the Columbia Street entrance. The theatre’s grand opening, complete with numerous vaudeville acts, was held on April 9, 1928.

Originally the theatre could only show silent films. Early in 1930 the Vitaphone sound-on-disc system was installed. That method of producing sound was constantly nagged with technical problems as delightfully noted in the MGM musical comedy film, “Singing in the Rain”. The following year these problems were solved when sound-on-film equipment was installed. By the mid-1930’s Karsch further updated the projection booth with top-notch projection equipment that increased light output to the screen by 60%. CinemaScope was introduced in 1954.

Thanks to its large stage, the Ritz Theatre proved to be an important gathering place for numerous events, including variety shows, club meetings such as the Roy Rogers Riders group, square dances, church services, and even a monster show featuring a local actor named Bozzie who wore a monkey suit. During World War II, Twentieth Century-Fox stars Gene Tierney and Anthony Quinn took the stage to sell war bonds.

For years the front part of the building facing Columbia Street housed a rental store owned by the theatre. On May 27, 1964, that store, occupied then by the P.N. Hirsch Co., was destroyed by fire. The 5-alarm fire, one of the largest in Farmington history, also damaged several other stores on Columbia Street and closed down the theatre auditorium because of water and smoke. The theatre never opened again. Its last show was “Fancy Pants” with Bob Hope. In the end the seating had been reduced to 672.

Though the entrance building of the Ritz Theatre had to be rebuilt following the 1964 fire, the auditorium has survived and the side of the building can be seen along South Washington Street, with the stage house extending along Harrison Street. It is occupied by a school of dance, the Ballet Arts Center, though the school uses a Jefferson Street address, with a new entrance cut into the building, facing the parking lot on that street.

The site of the theater’s former entrance and the adjacent storefront is now utilized for a music store and school called Music Makers, with multiple studios and a repair facility specializing in stringed instruments. Their web site features several photos of the theater in its heyday.

Plans for a new theater in Farmington were announced in the May 13, 1927, issue of Motion Picture News:

“The Farmington Entertainment Company of Farmington, Mo., of which Dr. C. A. Tetley is president, has had plans prepared by J. Hal Lynch & Son, 412 Dolph building, St. Louis, Mo., for a new theatre. Construction plans will be prepared at once, as preliminary sketches have been approved.”

The partnership of architects James Hallowell Lynch and his son, Hallowell H. H. Lynch, was active from 1917 until 1931. Their Farmington project must have consisted only of the theater auditorium, and alterations to accommodate the theater entrance in an existing building on Columbia Street, as historic photos show the Columbia Street buildings to have been of Victorian style.

Here is an additional item about the Ritz from a later issue of Motion Picture News:

“The Farmington Entertainment Company, headed by Dr. C. A. Tatley, is taking bids on a new house for Farmington. J. Hal Lynch & Son, 412 Dolph building, St. Louis, Mo., has prepared the plans for the new theatre. It will be one story, 65 by 111 feet, and of reinforced concrete, brick and new construction.”