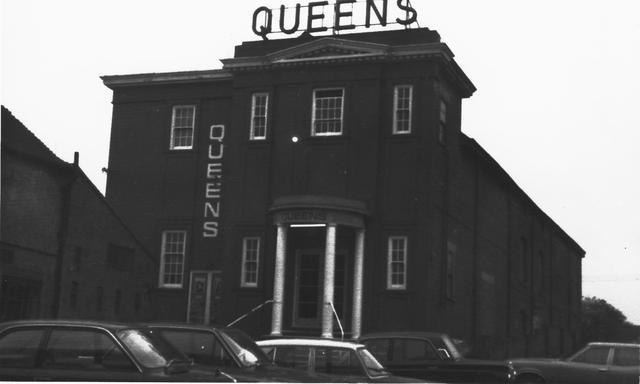 Up a passage from the lower end of the High Street, the Queens Picture Theatre was converted from a brewery and followed the Drill Hall and Empire Cinema as the towns third cinema. Opened on 21st February 1912, the manager later claimed it was the first to use a mirror type of arc lamp. A three piece orchestra was provided initially.

A month of renovation by Watchester Cinemas took place 56 years later in 1968. After the Classic Cinemas chain took over the nearby Odeon, films were dropped here in 1973, but a theatre failed to attract audiences. Ray Sutton from Sheerness hoped to re-open for films, counting on the Classic going over to just a bingo club, but a covenant prevented the re-opening in 1978.

Various nightclubs and a disco took possession from 1980-84, but rowdyism and two fires sealed the building’s fate. It was demolished and a car park is all that remains. More details are in John Clancy’s book “Long-gone Cinemas of Swale”(2003).

John Clancy in “The Long- gone cinemas of Swale” (2003) says the porch was added between the wars. His books contains extra photos including interior.