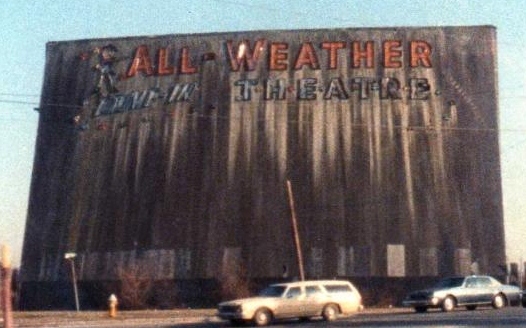 The All-Weather Drive-In was opened on April 20, 1957 with Deborah Kerr in “Heaven Knows, Mr. Allison”. This was one of those drive-in theatres that also had an indoor cinema where they ran the same movie. Near the end the 1,200-seat indoor cinema, known as the Copiague Theatre, was playing different films, usually grind double features, then closed it totally. UA ran this place into the ground–the last summer the screen was so dirty you could hardly see the film. It closed on September 3, 1984 with Bo Derek in “Bolero” & Clint Eastwood in “Tightrope”.

Why was it called Johnny All Weather?

The overview is not totally accurate. When Prudential built this, and two other All Weather Drive Ins (the Patchogue Sunrise and the Smithtown, the same film played indoors and out, albeit at different times, regardless of the weather. It was only in the 1980s when operated by UA that it was not uncommon for two different films to be shown (actually three since the drive in portion always had a double feature).

According to the April 22, 1957 issue of Motion Picture Daily, the grand opening of the All-Weather Theatre was “Saturday,” making it April 20, 1957.

NeonMichael that assumption is correct as verified by the opening ad which appears in the photo section.

The site is now a shopping plaza anchored by Home Depot and Target. There is a Red Lobster on the site where the screen used to be. Why the name Johnny?

All the Prudential “All Weather” Drive-Ins (Smithtown, Johnny, Patchogue) started out with one screen inside and one outside, both playing the same features and not differentiating the name. As time went on and business slowed the indoor and outdoor theaters showed different films. The Patchogue one shut down the drive in, added additional screens, and was rebranded as the Patchogue-Sunrise.

All are now history.

One of the ads in the photo section, “RETURN OF THE DRAGON”, shows the indoor theatre listed as the “Copiague Indoor”.

World’s only All-Weather Drive-In theatre per: 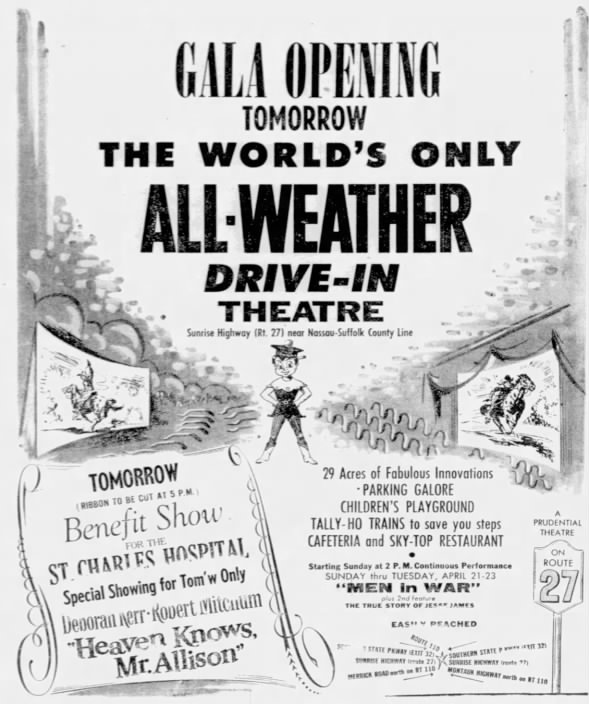