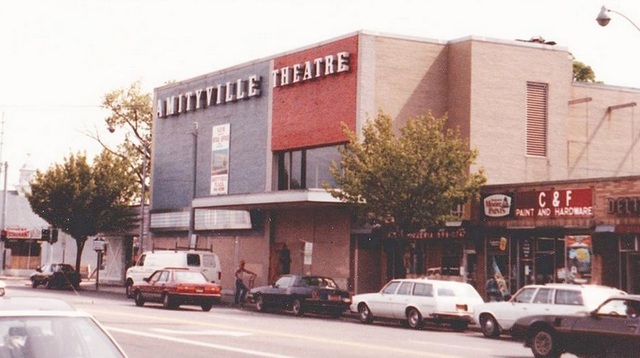 This was the third Amityville Theatre to be built on this site, replacing the 1936-built theatre. Originally built in 1960/61, it was a neighborhood Prudential house that flipped between first and second run. It was then twinned and went all first run. At the end in 1986 it was double features for $2 as the theatre crumbled into oblivion.

There were two Amityville theatres on the same site. When Broadway was widened the first, and smaller one, fell. A new theatre, double the size was erected in its place. In ads it was referred to as
The Big A.

To longislandmovies, can you tell me more about the sisters who ran the Amity theater. Were they employed by AIT? How did you know they took very good care of the theater etc. etc.
Thanks,
Jerry

They were from AIT…Cathy and I cant remember the other sisters name. When the theater closed they both went to work in the dm office for Almi century. (might have been RKO CENTURY WARNER BY THEN) There reputation as managers of this theater was stella. I have never been in this theater.

Thanks for the update- I assume, of course, that they were siblings and not “sisters” as in nuns!!

As it turns out there were THREE Amityville theatres on the same site. The first started out as the Star and was renamed when taken over by Prudential. Prudential then built a new, larger theatre on the same site taking over neighboring retail space. Then when Broadway was widened the second theatre was “in the way”. A new, ever larger Amityville was built by Prudential. Then twinned. Then closed.

This house is probably the theater at Amityville that was designed by architect Maurice D. Sornik in 1960, as listed in his entry in the 1962 edition of the AIA’s American Architects Directory.

Timing is right since the theatre was constructed 1960-61.

The “BIG A"had two different size seats ground level toward the screen.Look a the Pequa Theater photo page for examples of seating.