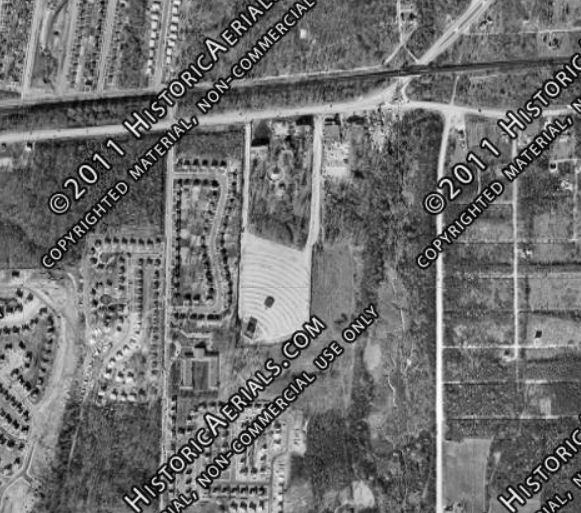 Opened June 19, 1950, the Massapequa Drive-In was located on Sunrise Highway, just east of Unqua Road, in Massapequa, on Long Island. First owned by Prudential, later United Artists, then, (I believe) Century. From the early-1960’s they always had a double feature, except for “Exodus” and “El Cid”.

The drive-in was located adjacent to the Frank “Bring ‘Em Back Alive” Buck Massapequa Zoo and Kiddie Park. As a matter of fact, the monkey mountain was next to the ticket booth. While waiting in your car, you could watch the monkeys. The Massapequa Drive-in had a simple concession stand and playground. The had pin wheels and fireworks on the 3rd of July, each year.

In 1964, the large wooden marquee burned down. It was replaced with a smaller, modern green and white plastic one with flashing balloons on top. It was closed in 1968. It’s now the site of Sears and other stores. It’s big co-owned brother, the Johnny All-Weather, was just a few miles down the road.

To Bloop, there are some photos in the Sunrise Mall now that show the area. One is an overhead shot showing the drive in, Uncle Buck’s etc. They are hanging on the wall by the escalators on the south side. The second floor display has the photos that I am talking about, but there are also old Massapequa photos on the first floor. Don’t know how long these photos will be displayed

UPDATE ! I found filmed footage evidence of this drive in! The 1968 exploitation movie “Teenage Mother” was filmed here on Long Island by Jerry Gross (he’s the man that brought us movies like “I Drink Your Blood/ I Eat Your Skin”!). Anyway, Teenage Mother has a shot of the marquee (I think “…..apequa” can only be seen) as well as a short action scene takes place at the drive in at night. You can see off in the distance some twinkling lights that would possible be the scape of Sunrise Highway. Something Weird Video sells this for about $10.00 OR look for it on YouTube. Another scene has the star teenaged mother going home to her parent’s house—and the outside looks like a typical south shore Long Island home too!

A case of worth more dead than alive. It was not a particularly impressive drive in.

Uploaded generic ad trying to get the South Shore people to go to the drive in.