UA The Movies at Sunrise Mall 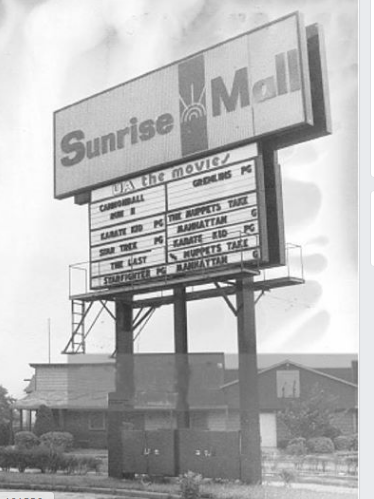 This was one of Long Island’s first multiplexes. It opened on May 23, 1975, shortly after the Sunrise Mall opened. United Artists signed a twenty year lease. The box office was originally in front of the theatre. When it stated getting congested, they moved it to the center of the mall where there was plenty of room. It opened originally with five screens, and in 1977, expanded to seven screens, with auditorium 6 housing the new Dolby Stereo CP-50 processor with surround sound. In February 1984, they added two more screens.

The theatre closed in 1999, shortly after United Artists opened the new Farmingdale ten-plex, and after the lease had expired.

Knew about the Lynbrook (they still haven’t begun the demolition of the old theater) but another at Sunrise Mall? From the scope of it I would think a new building would be required rather than using space in the existing mall.

If they don’t repurpose the now closed Walmart location they will have to build by the Carmans Road entrance to the complex. Just came back from the mall and saw no signage about a new theater.

Went past the mall today and did a full circle. There is no new construction nor any signage re the theater which is supposed to open this year. A portion of the old Walmart is becoming a Dick’s Sporting Goods Store. Perhaps the balance will be repurposed for the theater.

The Regal site no longer contains information about a new theater at the Sunrise Mall.

robboehm. See if the local press will update on the theater. Or if near the construction site maybe somebody there will tell you. Maybe revised plans have been filed with the building dept??

Several years ago it was announced in the press that there would be a new theater at the Sunrise Mall. Nothing since. I found out about the intentions for a 2017 opening at the Regal site when I was looking to see when they planned on opening the new Lynbrook, which is now well under construction.

Since I was in the area of the Sunrise Mall I scouted to see where the theater would be. There was no new construction which would have been obvious for an IMAX and, I forget, around a dozen screens. That’s when I went back to the Regal site and saw the Massapequa Mall had been deleted.

With two large multiplexes in nearby Farmingdale I really don’t know why they had considered this site anyway.

Maybe they come not come to terms regarding their lease. RKO Century had planed on building a theater in Yonkers, NY as part of the current Costco-Stew Leonards site. They ended up in court over many varied issues and it never was built.

Another reality of that site I don’t think there would be sufficient parking for a massive theater. The original theater was on the second floor of the mall. A little nothing.

Will history repeat itself? Regal has announced they plan to open a ten screen theater on the site of the former Walmart at Riverhead Plaza in Riverhead. This time, they plan on tearing down the Walmart and erecting a free standing structure. At the Sunrise Mall I believe they would have had to modify the actual Walmart space since there was really no room on the site for another structure and still have adequate parking.