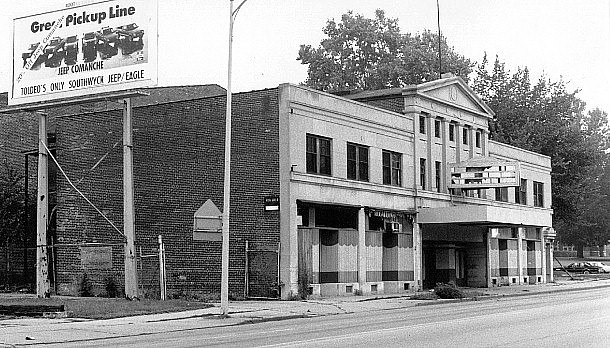 The State Theatre was opened in December 1927, and was designed by Cleveland architect Nicola Petti.

The magnificent Toledo State Theatre! 2000 seats on one level, housed a 3/11 Marr & Colton of which many recordings survive. Farewell concert on the organ in 1971, theatre subsequently boarded up/abandoned. The years that followed were not kind: gang activity, vandalism, scene of a tragic murder, and finally in 1995, despite local efforts to find a developer to restore, was torn down. The only positive note: The fine Marr & Colton pipe organ was donated to the Toledo Area Theatre Organ Society for eventual reinstallation. See the Toledo OHIO Theatre for details on that theatre organ society and their ongoing presentations.

I would pay three bucks to see Bob Seger and MC5. Kick out the jams.

The Cleveland Landmarks Commission’s list of buildings designed by architect Nicola Petti includes the State Theatre in Toledo. The design was done in 1927.

The front of the State Theatre had a remarkable resemblance to that of the LaSalle Theatre in Cleveland, which was also designed in 1927 by architect Nicola Petti. I think he might have used the same plans for both houses. If anyone from Toledo wants to know what the city lost with the demolition of the State, they can go to Cleveland where the LaSalle is still standing.

First ad for the State December 1st, 1927 has been uploaded in the photo section.

Another beautiful theatre neglected by the city of Toledo due to urban decay and a dark history.