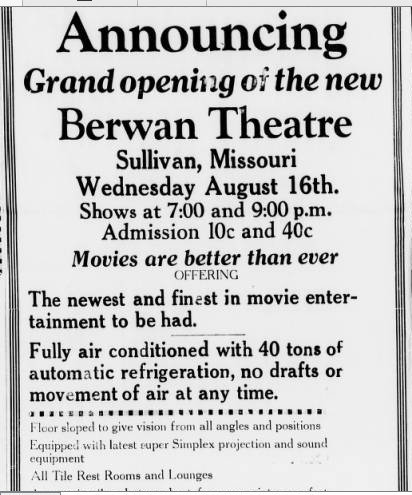 The Berwan Theatre opened on August 16, 1950. The opening attraction was “Duchess of Idaho”. It was owned by Myron S. Woodcock who also owned the Grande Drive-In in Sullivan. The theatre was Quonset Hut style and seated 412. The theatre operated into the late-1970’s.

The August 10, 1950, issue of The Sullivan News (top of page, second column from right) said that the new Berwan Theatre was located on Euclid Street. I suspect that it was on the triangular block formed by Euclid, Maple, and Clark Streets. That block is now a parking lot, and I don’t see any quonset huts anywhere in Sullivan in Google’s satellite view. The Berwan Theatre has probably been demolished.

This is from a DVD review by Sam Moffitt on a movie web site:

“I got to see Lady In Cement in a theater, the Berwan in Sullivan, Missouri in 1968, with Frank Sinatra playing private eye Tony Rome.”

If Mr. Moffitt’s memory is correct, the Berwan was reopened at some point.

An article about the theater department at Eastern Central College in Union, Missouri, says that the seats in the school’s first theater, opened in 1978, came from the old Berwan Theatre in Sullivan. I don’t know if the Berwan had simply been reseated or had been dismantled by that time, but the latter seems the more likely event.

My family owned the Berwan and Grande Drive In. It wass open through the late 1970s, then we closed it and eventually it was torn down.

The Drive In stayed open a few more years—1981, 1982?—then we sold it as well. The new owners (don’t know their names) kept it open for one or two more seasons but eventually sold it and it too was demolished.

They sure were great movie theatres….definitely the best way to grow up! ;)

Can you tell me if I was correct in my guess that the Berwan Theatre was on the triangle between Euclid, Maple, and Clark Streets? Or better still, do you know the theater’s exact address?

Yes, that’s where it was I think. Behind it was the grocery store….it was a Buy-Rite for a long time, then a Kroger I think.

I’ll poke around and see if I can find the address.

Thanks, Ferretman. I see from Google’s satellite view that the entire block the theater was on is now a parking lot, but it looks like there aren’t many places nearby to go to once you’ve parked your car.