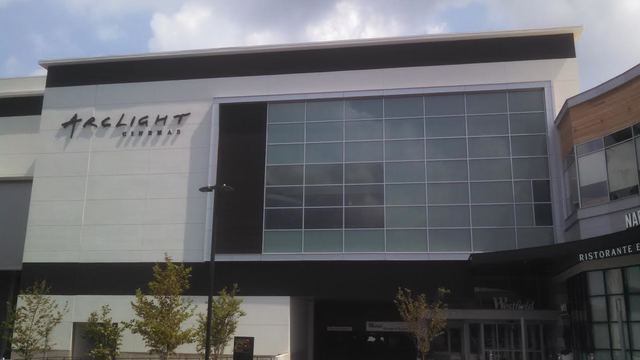 This 16 theatre complex has auditoriums as small as being able to sit 70 patrons to it’s larger auditorium at under 300.

State of the art digital projection comes from Christie 2K and 4K systems, with one being able to playback High Frame Rate movies.

One screen will be able to present films in 35mm and will showcase the Arclight’s “ArcLight Presents…” series featuring cinema classics, limited releases, and exclusive content.

It was closed on March 17, 2020 due to the Covid-19 pandemic. It was announced on April 13, 2021 that the closure would be permanent in all ArcLight/Pacific theatres.

It was taken over by AMC Theatres and reopened March 3, 2022 as the AMC Montgomery 16.

I simply had to see Peter Jackson’s documentary WW1 movie “They Shall Never Grow Old” here and it was a fantastic experience on their widescreen screen here! Warner’s must have mandated 3D screenings of this because almost all of it’s screening in auditorium #6 are just that, and it’s exemplary – the Dolby Atmos mix was equally impressive – this is one of the movies where every element: the restoration of the footage, the 3D imagery, the soundmix, the subject matter all came together to such tremendous visual/auditory effect

I thought I had heard a murmuring that another chain ([cough] ‘Cinemark’) was doing a hush-hush acquisition / interest of the space - ?? Honestly I wish Showplace ICON might take the bait, their Boro (Tyson’s Corner) location is the best in the DMV area, in terms of 2K/4K Barco laser projection and state of the art sound.

Deadline reports that AMC is taking over the lease at the former Arclight Bethesda with an opening expected in March 2022 as AMC Montgomery 16. No other details; I assume they’ll wait a bit to see if it’s worth investing in to remodel in the AMC style. At a minimum I expect they’d put a digital IMAX or Dolby Cinema in the Widescreen auditorium, which of course means ripping out the masking.

As I was in the neighborhood, actually today, March 2, was it’s reopening. I was curious to see what it looked like, that huge wall of posters was still there. I inquired about the Dolby Atmos systems, and I got the most convoluted, bonkers explanation of why ‘The Batman’ is not being presented as such - the manager explained it like twice and neither time it made any sense. He also explained that (the previous fourteen) auditorium sound systems have also been downgraded from 7.1 to now 5.1 surround.

I was there yesterday seeing ‘Studio 666’ and it was interesting to see that little changed, the seating from the Arclight is still in place AND surprise, surprise, the vertical masking, whether that was retained for the ultra-large screen (auditorium 6) remains to be seen.

I would guess AMC considers Atmos a “premium” format, meaning something they only offer if they can charge extra. Since they only offer Atmos in Dolby Cinema and haven’t yet reconfigured any auditorium as such, that’s why they refused to play it.

In the long term my guess is they’ll convert 6 to a digital or laser IMAX and 7, the other Atmos-equipped auditorium, to a Dolby Cinema. The latter is in the middle of the pack in terms of screen size and capacity…the screen can’t be more than 35-40 feet wide, and with recliners it wouldn’t seat more than 80. But that would be cheaper than installing a new Atmos system in one of the larger auditoriums, so of course that’s what AMC will do. And I guess if people are willing to pay $25/ticket for something they think is a “premium experience” just because the salesman tells them so, that’s the fault of their own stupidity.

Wait, they seriously downgraded all of the auditoriums to 5.1 sound? Originally I was going to give AMC a chance and check the place out since they took over, but if that’s the case, forget it, I won’t be going back…