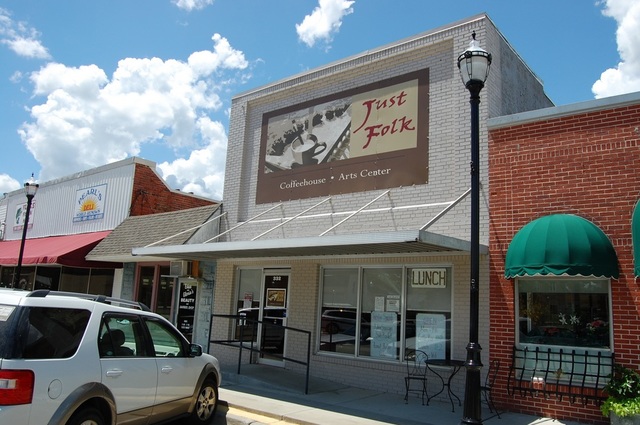 By 2014 it was owned by the Covenant Community Church. The building has been renovated and is used as the JustFolk Coffee House and Arts Center.

The November 1, 1947, issue of The Film Daily said: “Walter Brackin has opened his new Claire theatre in Elba, Ala., with a seating capacity of 250.”

The 1958 FDY lists the Claire and Elba Theatres as Brackin houses, but then the FDY was notoriously unreliable at updating its circuit listings. The Claire was apparently closed by then. This line is from an article about Covenant Community Church of Elba in the October 22, 2008, issue of The Elba Clipper:

“The coffeehouse is housed in a building constructed in the late 1940’s for the ‘Claire Theater,’ which operated until around 1952. Other businesses used the space, but after the town flood of 1990, the building remained empty and full of debris. After nearly twenty years of neglect, the building was donated to Covenant Community Church.”

I am wondering if the ‘New Theatre’ of ca.1937 was not actually a new location for the Elba Theatre? The Elba was listed in the 1927 FDY with 250 seats, but the building it is in now is twice the width of the Claire’s building, so must have had more seats than the Claire.