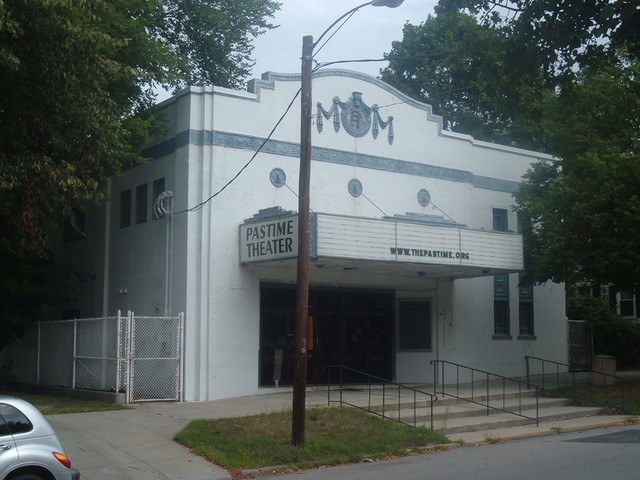 The Pastime Theater began showing films in 1912. Fire destroyed the original building and a new one was built on that site that same year, 1934. The exterior remained largely unchanged, but little of the original interior had remained.

The Bristol Pastime Theater Foundation had sought funding to acquire the property, restore the exterior and renovate the interior to accomodate performing arts as well as cinema, but unfortunately, this never came to pass and the Pastime was torn down.

The Pastime Theatre has been demolished. Today I saw the fenced-in vacant lot.

As a kid I would attend the ten cent matinees at the Pastime. My adopted “uncle” was the projectionist (one of two, actually). We each got a quarter for the afternoon. That bought popcorn and two candy bars or popcorn and a drink.
We’d see a cartoon, the feature, and either a serial or a Three Stooges or the like.
Good times, Good times.
The Pastime was one of the first theaters in RI to get Cinemascope.

When the Pastime was one theater it did hold 600 people.

Prior to leasing the Lyric and Pastime, Modleski had served as manager pf the Lyric for Vail until the latter’s death. Modleski broke into motion picture exhibition in August 1920 as an usher at the Lyric Theatre. He told BOXOFFICE that he plans to make alterations at both of the theatres.

Lostmemory’s 2007 post’s photo gave me the URL, which resulted in this:

Additionally, I was visiting home in Bristol the weekend before last, and when we were discussing the theater, my father mentioned that it had originally had a single screen. I don’t remember it being that way, though I do recall that it was obvious that it had been changed. Thus the conversion must have been between 1969 (the year we arrived in town) and the late 1970s. Another name for it was the Bristol Twin Cinema.

The land is currently occupied by an expansion of the neighboring Andrews School (to stage right in the photos), as also partly implied by the marquee in lostmemory’s first photo.

I grew up in Bristol, indeed it was a single screen. As a child fond memories, a dollar would get you a ticket,a popcorn,soda and hershey bar. You knew the movie was about to start when you saw the manager go to the stage to open the curtain.In high school it was my first job. I sold concession and cleaned, at that time it was still a single screen.The concession stand and popcorn warmer was actually bought at the auction of the equipment of the Majestic in Providence.One event i’ll never forget was opening weekend, the film was “Airport”.For some reason they put up masking for a scope picture,well they did it without testing the picture size.When the film started, the picture overlaped 4 feet on the bottom. I had to go up on the stage and infront of the sold out audiance, pull the masking down.The early 70’s the theater was twined,each day cement masons came in to build a cinder block wall, and at the end of the day we came in to fill the blocks with sand,i guess to keep the sound from bleeding through.After the twining,it will be remembered as the theater with the couches.Couches were installed instead of seats.As for me, I always will remember the manager walking down front and the big red velvet curtain opening.

The Theatre Historical Society has the MGM Theatre Report for the Pastime Theatre; it’s Card # 523. Address is Bradford St. There is an exterior photo dated May 1941. The marquee had an attraction board only on its left side. The condition is Good. The report says the Pastime was built in 1935, but then says it has been showing MGM films for “over 10 years”. There were 616 seats. The 1940 population of Bristol was 11,100.

1941 PHOTO OF PASTIME THEATRE IN MGM REPORT Thanks to Theatre Historical Society of America.

In 1987 I was hired by the owners of the cinema on Bradford Street in Bristol. At that time it had two screens. Originally I sold concessions and ushered. I then became a projectionist, cutting together the films and winding them on the platts, starting them up and taking them off to pack into the film cases. I had had experience when I lived in Alaska. I remember Empire of the Sun played that year. There were two women that owned the theater and they lived close by as roomates. They had a daughter, a preteen. I left to go to the Marriott in Newport when they opened. I know that the Theater stayed open for a few years more at least. I miss this theater as it was a neighborhood fixture and I have good memories of it. http://www.thepastime.org/history.html Unfortunately this link does not work anymore. Is there another link for it?