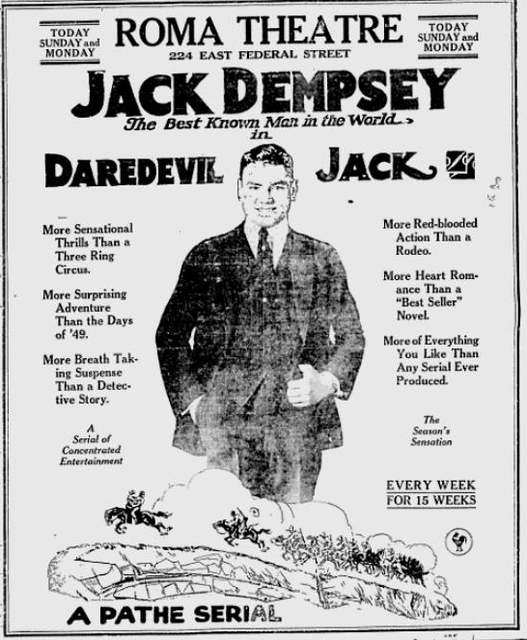 The Roma Theater suddenly appeared in the Youngstown Vindicator with a full page advertisement, but then stopped advertising a couple of weeks later.

The November 26, 1921, issue of The Billboard said that Charles Ellison was organizing a stock company to play at the Roma Theatre in Youngstown. I haven’t found any later references to the company so I don’t know if Mr. Ellison succeeded in establishing it or not.

There was a Roma Theatre operating in Bellaire, Ohio, in 1915, owned by an Antonio Megna. I wonder if he eventually moved his operation to Youngstown? The Social Security Death Index lists an Antonio Megna born in 1889 who died in Youngstown in 1975. It’s not a common name, so it might have been the same Megna who operated the theater in Bellaire.

I also recall coming across a trade journal item from the late 1910s which said that among the many theaters then operating in Youngstown there were five that catered primarily to the city’s large population of Italians. If the Roma fell into that category then it might have switched its advertising from the Vindicator to Youngstown’s Italian newspaper, Il Cittidano Americano.

The Roma Theatre was also mentioned in the February, 1922, issue of American Photography. Someone named Frank Shea, with the Roma as his address, was offering to exchange prints with other photographers.

Joe, the Jack Dempsey ad ran 2/21/1920. As I said elsewhere, the local theaters with the exceptions of the major theaters were inconsistent in their ads, so the MVHS in compiling a complete list of all the local theaters is having to pour over the Youngstown City Directories, and since it’s a one person task, it’s going to be some time before such a list will be available.