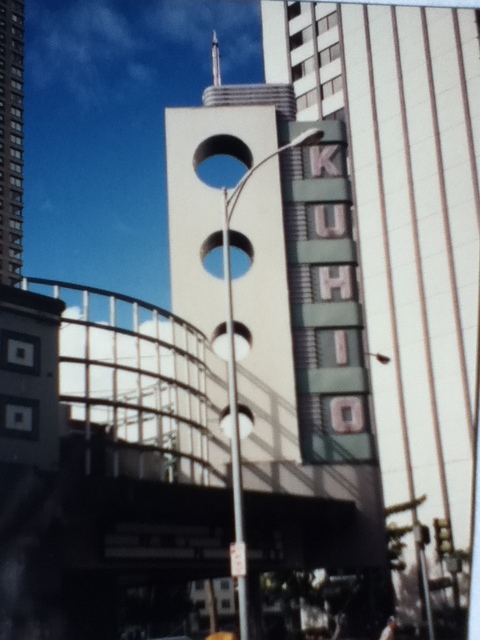 Located in Waikiki, Honolulu, the late-Streamline style Kuhio Theatre opened June 21, 1945 with Paul Muni in “A Song to Remeber”. It could originally seat 950.

During the 1960’s, the Kuhio Theatre featured road shows, and in October of 1966, the Hawaiian premiere of the movie “Hawaii”, based on the James Michener novel of the same name, was held at the theatre.

The Kuhio Theatre’s 70mm screening capabilites were removed when the theatre was twinned on December 15, 1976 after it was acquired by Pacific Theatres.

My pleasure.
I loved the Royal with its garden entrance and large orchestra seating area. The presidium hosted two curtains, a Royal Blue traveler curtain and a Gold Contour curtain.
I had the unpleasant responsibility of dismantling the theatre when it was closed, a very sad experience,
I remember thinking I hope never to have to do that again to another theatre. I had driven Royal theatres CEO Herman Rosen to the theatre the last night it was open for one last look. He hated closing it, but he had sold the company and we began downsizing, starting with closing the home office and then the Royal and Sunset Drive in. Consolidated took over the Marina and ran it for a while before selling to a steak house operation.

The Kuhio had a rather plan auditorium with no draperies or screen curtains.

look at all the one sheet frames! You sure it was a TWIN.Lol.

I’ll be posting a picture from February 1994. Some great first run movies from the 1980’s at the Kuhio 1 and 2 that I saw : The Four Seasons, The Outsiders, Mr Mom, Streets of Fire, Revenge of the Nerds, All of Me, Mischief, Vision Quest, The Breakfast Club, Ferris Bueller’s Day Off, The Secret of My Success, Evil Dead 2 : Dead by Dawn.

They went all out for the 1956 showing of “Away All Boats”, a WWII movie starring Jeff Chandler. There was a target drone aircraft in the lobby and an amphibious armed personnel carrier parked in front.

I want to correct some information above and add some further details about the Kuhio.

It opened on June 21, 1945 and seated 950. It was actually ready to open in early 1942, but after the Pearl Harbor attack, the Navy requisitioned it for use as an air-conditioned warehouse and office space during WWII, hence the delay. It was built by Consolidated Amusement Company, which was purchased in 1959 by Pacific Theatres/William Forman.

The Kuhio was the primary hard-ticket roadshow house for Consolidated . CinemaScope and stereophonic sound was first featured locally for The Robe on March 12, 1954. Todd-AO was introduced at the Kuhio for South Pacific on June 27, 1958. When the theatre first opened it had aisle carpeting that glowed under ultra-violet light.

Vincent Raney designed two other theatres for Honolulu after WWII, but they were never built.

I’ve been researching Hawaiian theatres for more than 50 years and wrote a book, Theatres of Hawaii, published by Arcadia in 2011. I’m always happy to hear from people with recollections of local theatres.

June 21st, 1945 grand opening ad in the photo section and below:

New Showcase Presentations in Honolulu article includes mention of the numerous 70mm and roadshow presentations here and at other Honolulu cinemas.

Opened as a twin with “The Pink Panther strikes again”.