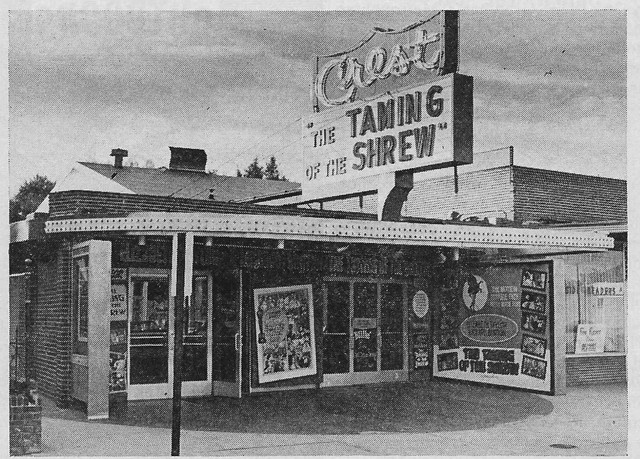 Opened as the Tower Theatre on November 23, 1949. On December 31, 1961 it was taken over by Wolfberg Theatres and was renamed Crest Theatre. After closing (date unknown) it became a church.

A book about the Park Hill neighborhood is reviewed on this web page and it mentions that the Crest opened as the Tower Theatre in 1949, and after its days as the Crest Theatre was converted into a Korean Presbyterian church.

The building was listed on LoopNet about a year ago, but now appears to be off the market. It might currently be vacant, but in Google street view the building looks to be in very good shape. It is an L-shaped theater with a fairly large auditorium running parallel to the street behind a row of storefronts.

The Crest opened 12/31/61, shortly after John Wolfberg (Compass Drive-ins, etc.) took the theatre over. It operated as The Tower for 12 years, beginning on 11/23/49. I am putting together a series of books on the history of the Denver area drive-ins and indoor cinemas. If anyone has any questions on the subject, please feel free to contact me at and I’ll be happy to share my research with you. Thanks ! – Ken Mitchell