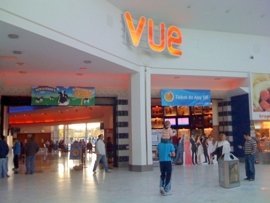 This cinema was opened on 16th July 1999 in the Liffey Valley Shopping Centre on the outskirts of Dublin. It was the first cinema in Ireland to take the “Ster Century” brand.

In 2005 Vue acquired Ster Century UK & Ireland and the company made an announcement that they “have acquired the top grossing cinema in the UK and Ireland, the Ster Century Liffey Valley multiplex”. By 20th January 2006 it had been re-named Vue.