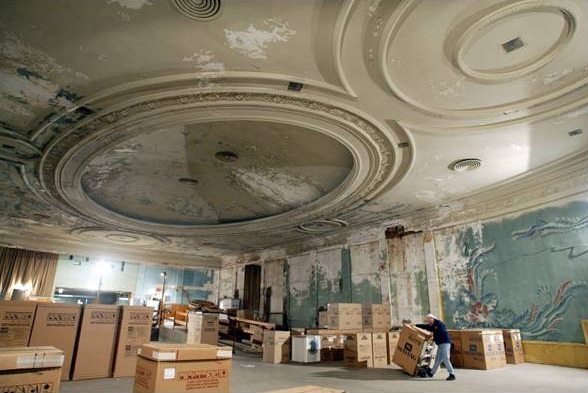 Opened in November 1927, this neighborhood theatre was operating through to August 1973. The Clinton Theatre was originally part of the J. Real Neth chain. The marquee and lobby existed, and the auditorium was adequately preserved in its closed condition, in use as an electrical appliance warehouse.

The building became vacant in 2003, and plans were proposed to redevelop the theatre block, but these have apparently since fallen through. In October 2010, there were proposals put forward for the theatre to be demolished, which happened almost immediately.

What are they tearing it down in order to build here?

ron i think they are just tearing it down so someone might buy the land and build. so now it might be a empty lot for years to come.

Is this theater classified as Art Deco merely because of the flowery murals from the 1940s? The facade is made entirely of classical elements. There’s nothing Art Deco about the balustraded parapet with urns, the cornice, the peaked window pediments, the double pilasters, or the rest of the trim on the facade, and the interior photos show that most of the original plaster work there matched the exterior style. This theater would best be described as Adamesque.

I’d certainly call interior details such as this and this more Adamesque than anything else. It looks like the murals added in the 1940s took up some wall space that had probably been blank until then, but the original architecture was largely untouched.

They’ll probably build a 7/11 or some strip mall sort of thing there. Progress…….

The official closing date for this theatre was 8/14/1973. The final feature shown was WHITE LIGHTNING.

So Burt Reynolds Closed it.

i was able to get some yellow bricks from the clinton last night.

Should the status be changed to Demolished yet?

The Clinton lives on in a mural being painted underneath the railroad bridge on E. North Broadway.