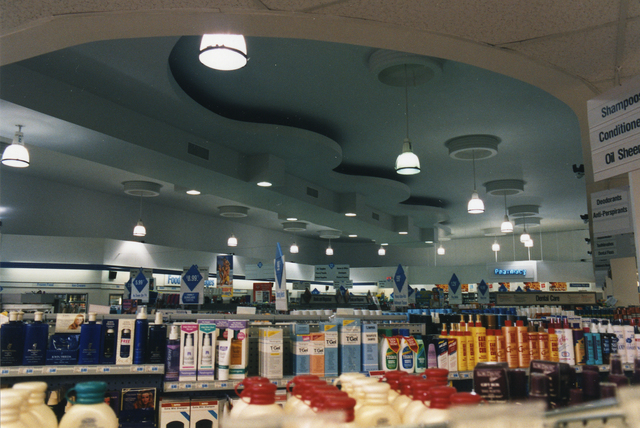 The Beechwold Theatre was an 800 seat single screen theatre. It opened on February 14, 1941 with Alice Faye in “Tin Pan Alley”. It was remodeled to become the Camelot North Theatre in 1972, and became the Drexel North Theatre in 1986. It closed in the spring of 1995 after 54 years of movies.

During its final years it was operating without a lease. Basically, the people who owned the property decided they wanted to sell the building, and the Drexel could not afford to buy it. Until the owners could find a buyer, the Drexel was permitted to lease the building on a month-to-month basis. Very few developers were interested in the property, and the theatre’s miserable condition was enough to frighten most of them.

However, Revco Drugstores eventually purchased the building at an estimated price of $250,000. Upon acquiring the property, Revco quickly terminated the Drexel North’s monthly lease and instructed the theatre to close.

I really miss this one. My wife and I and our friends were frequent attendees in the late 1980s-early 1990s.

They had great film festivals, marathons, and midnight movies. They showed indies, art films, documentaries, foreign films, and quite a bit of cult fare. We saw pictures like â€œAkira,â€ â€œBrazil,â€ â€œFrankenhooker,â€ â€œVampire Hunter D,â€ â€œHenry: Portrait of a Serial Killer,â€ and â€œRobotjoxâ€ at the old Drexel North.

Outside wasnâ€™t much but the inside was fun. The lobby had a weird futuristic shape and a bizarre color scheme and was sometimes decorated with props from past sci-fi marathons. It had a kitschy retro-future feel.

They usually had a drawing before the show where patrons could win promotional items like t-shirts, posters, and soundtrack CDs or free passes to upcoming shows.

Screenings were preceded by a mock 1950s educational film called â€œA Trip to the Movies.â€

This theater now has its own Facebook group: Remembering the Drexel North / Camelot North / Beechwold Theater.

I would really love to find some pre-1970 interior photos of the Beechwold Theater’s foyer and lobby. (I’m not so sure the interior photos linked to above are of the same theater.) I’ve been searching for years without any luck. I’m wondering if Columbus area theater historian Phil Sheridan might have found some though- he was working on a 4th volume of his book series Those Wonderful Old Downtown Theaters which was to focus more on neighborhood theaters, including the Beechwold. But sadly, Mr. Sheridan’s health declined and he passed away a few years ago before finishing it.

The text accompanying the photos at Columbus Metropolitan Library (Ron Newman’s comment of May 8, 2005) says that the Beechwold Theatre was designed by the F&Y Building Service.

While the exterior of the theater was predominantly Streamline Moderne, and even displayed some early Midcentury Modern elements, the photos of the interior show that the auditorium was more ornate than the facade. There was still a lot of Art Deco in that interior design, especially in the wall sconces and the decorations above them.

The description of this theater is not true at all. It was not in bad shape when it closed.

Phil Sheridan is my father. I retain his entire archive of theatre history and photographs. I also have a stock of all three of his books available for sale. His fourth book was completed and ready for publication, unfortunately the funds were not available to proceed with publication.

Jim, it would be a shame if the completed 4th volume remained unseen. Have you considered applying for a grant to get it published from the Ohio History Center (www.ohiohistory.org), or donating the materials to Vintage Columbus () or the Columbus Landmarks Foundation (columbuslandmarks.org)? Arcadia Publishing might be interested in the rights to the whole series. Alternatively, I could personally assist you in scanning it to PDF format if you would consider releasing it as an e-book.

^^ Vintage Columbus is primarily Facebook-based and may be reached at VintageColumbus (at) yahoo (dot) com.

Jeff Frank was the theater owner.
There is a article about this theater in Scary Monsters Memories #4. Article titled “The Drexel North Closes: The End Of A Era”.

Anyone who frequented the Drexel North probably remembers the giant art deco poster case which sat in the back of the auditorium between the restroom entrances, advertising whatever movie was currently playing at the Drexel Bexley. I bought that case when the North was gutted, and for several years it graced my apartment in Los Angeles. Had to store it for a while when I moved to a place without room for it, but now it’s proudly back on display in my bigger living room. One of my most prized possessions, it brings back memories of the countless horror and sci-fi marathons my friends and I attended there.