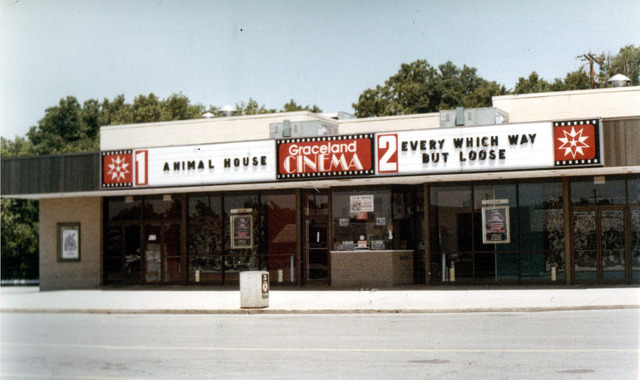 Opened as a twin Jerry Lewis Cinemas in the early-1970’s. The Graceland Twin closed in 2002. The theatre is now a Seasonal Concept Store.

I thought the York Plaza was listed here at CinemaTreasures, but I can’t find it. Do you have enough information on it to add it?

It was a single screen, on the north side of East Livingston Avenue, somewhere between Hamilton and Brice roads. Is the building still standing with a different use?

We now have a page for the York Plaza.

It is amazing how the front looks a bit like Columbia 1 and 2 especially the glass,Box office and one-sheet frames.

Columbia 1 and 2 in what city?

It is listed as COLUMBIA SQUARE CINEMAS in Augusta,Ga. It will always be Columbia 1 and 2 to me because it was a nice large Twin theatre before UA and Georgia Theatres turned it into a lousy small screen quad.

Theatre opened on Wednesday, February 28, 1973. First features were THE GREAT WALTZ and 1776. It was the last of the Jerry Lewis Theatres to open in the Columbus area.

My first job was as an usher here in the mid 70’s during the disaster movie craze. I saw the same few minutes of “The Towering Inferno” @ “The Poseiden Adventure” over and over. Usher was considered a “tipped” position and paid $1.15 p/h. Never got a single tip.

I discovered the Graceland Twin Cinemas in the mid-1970s, and it quickly became one of my favorite venues to see a movie. I would drive all the way to Columbus specially to go to the Graceland Twin Cinemas. The attraction was not only the $1.00 admission, but the fact that, unlike most multiplexes, the Graceland had screens that were wide enough to fully show anamorphic widescreen prints. I remember Disney’s “The Black Hole,” despite its faults, being an absolutely gorgeous film to watch on the full wide screen at the Graceland. Their screens were an obvious advantage to the showings of many other films including “The Untouchables,” ”The Thing” and “Scarface.” The short-lived 3D revival in the early 1980s gave the Graceland the opportunity to show their technical expertise. A showing of “Fantastic Invasion of Planet Earth” (an edited version of a film originally titled “The Bubble”) contained a floating tray sequence that actually made it look as if the tray was only three feet away from your face. To this day it remains the finest 3D effect I have experienced in a movie. The technical quality of the presentations was superior to that found in the more expensive first-run houses. There were obviously fully qualified projectionists in the booth. And after the movie, I would go across High Street to the Krispy Kreme and get a donut that was so fresh that it was still warm and squishy!