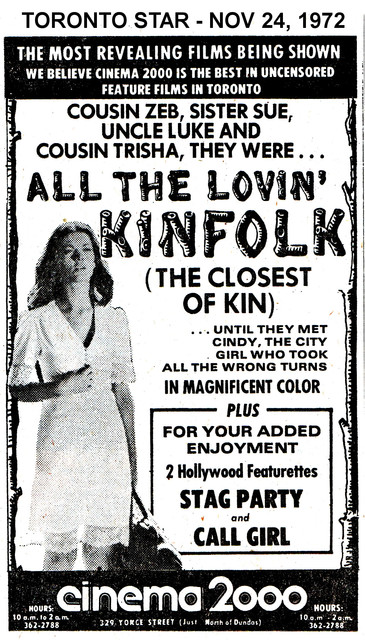 Small sex cinema on Yonge Street, just north of Dundas Street that by passed the Ontario Censor Board by showing videotapes rather than actual 16mm or 35mm films.

I have several advertisements from the Toronto Star newspaper for this theatre. This is an article I found on the web but it doesn’t give that much information. The picture that accompanies the article claims it is in public domain:

On March 2, 1970, police from the morality squad waited patiently in the lobby of Cinema 2000 for the showing of the film “Vixen” to finish. They then seized four videotape copies of the film. By the mid-1970’s Yonge Street, especially between Gerrard and Dundas, had become Toronto’s version of New York’s 42nd Street, a strip of adult-oriented businesses. Cinema 2000 was at the heart of the action.

When it opened in October 1969, Cinema 2000 found a way to slip through a loophole in the current censorship laws by showing films on videotape, which was not subject to censorship by the Ontario Board of Censors. Nevertheless, obscenity charges were filed against the theatre for showing the films commercially. Despite three separate legal proceedings and $40,000 in legal fees, the Court ruled in favour of Cinema 2000, making it the first cinema to win a sex censorship case in Canada.