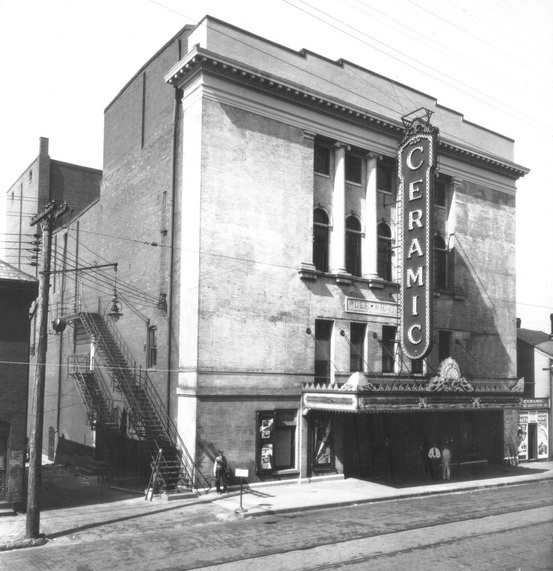 An unusually elegant (especially for this reknown pottery-manufacturing town) theater. It was originally opened on November 21, 1904 for live legitimate productions and by 1926 had converted to cinema. The name, of course, derived from what the town was/is famous. The interior had brocade-covered walls, gold leaf detailing and carved architectural elements. Definitely worth looking into.

The Ceramic was located on East 4th Street in East Liverpool and was considered that city’s finest playhouse. It was opened on Monday, November 21, 1904, under the management of Edward Moore and went down in November of 1961 for a parking garage that never materialized. There seem to be few photos of the interior, but there are several good ones of the facade and vertical, both daytime and at night. The theatre opened with DeWolfe Hopper reciting “Casey at the Bat” and went onward through vaudeville, operetta, and silent, then sound films. At one time there was an early Bartola pit organ installed. The stage was rumored to have been, along with the acoustics, the finest between New York and Chicago. There was quite a kick when demolition was announced, but the time was not yet ripe for the saving of buildings like the Ceramic. People still talk about the loss to this day, however.

Not originally built as a theater. Converted early on however. Here are a few pics.

The April, 1904, issue of The Ohio Architect and Builder published this item:

“New Theatre Operations are being started on the new theater to be erected in East Liverpool by Messrs. Jas. C. Tallman and Edward J.J. Moore, of this city, and Mr. Charles Peinler of Wheeling. The new playhouse will be erected upon plans embracing all the latest and most up to date conveniences and appurtenances, will be strictly fireproof and erected at a cost of $85,000 to $100,000. The plans for the structure were prepared by Architect Elliott, of Columbus, O., and they will call for a most beautiful structure both exterior and Interior, and when completed will be one of the most beautiful buildings of its kind in this section of the country. The arrangement of the building will be such as to afford the greatest convenience to both patrons and performers and also with a view to its acoustic properties, which will be the equal of any theater In the country. The new theater will be called the Ceramic, the name being suggested by Mr. Taylor, a prominent potter of East Liverpool, in recognition of the great pottery Industries of East Liverpool.”

The reference to “…Architect Elliott, of Columbus…,” in the article probably refers to Fred W. Elliott, a noted Columbus architect of the period. He also designed the Murray Theatre at Richmond, Indiana, a vaudeville house that later showed movies as the Indiana Theatre, and has for several decades been a live theater called, alternately, the Norbert Silbiger Theatre and the Richmond Civic Theatre. It’s on the National Register of Historic Places, but not yet on Cinema Treasures.

I was just a kid from the West End (grade school age)in the early 50’s. I remember going to the Ceramic Theatre to see the scary pictures in 3d wearing those silly paper colored glasses. After the picture, when it got dark, I was scared to walk home even with my bigger brothers thinking the monster would come out and grab me on the sidewalk, so I walked home down the middle of 8th st under the street lights keeping aware of my surroundings. Note: you know, it is 55 years later, and they still have 3d pictures where you still gotta wear those silly paper colored glasses!

What goes around comes around.

This theatre was definitely built as a theatre – my great-grandparents performed on its stage early on. It was constructed and advertised as perhaps the finest stage between New York and Chicago. I also have a copy of the opening program, as well as photos from very early. The organ was a Bartola – the Wurlitzer was not installed here but in the American Theatre up the street where it replaced an old Kimball. There are articles in ancient newspapers about it.