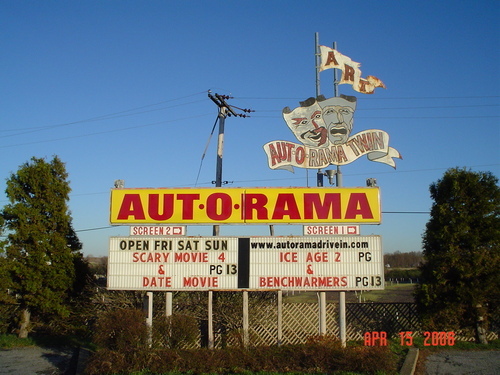 The Aut-O-Rama Drive-In was opened on July 2, 1965 with Robert Mitcham in “Mister Moses” & Glenn Ford in “The Rounders”. Another screen was added in 1972. The drive-in has never missed a season. Located sandwiched between the turnpike and the interstate.

The Aut-O-Rama Twin is open for another season. I just went with my daughter this weekend and we had a great time. We’ll definitely be going back again.

The poles are still up to guide you where to park on the gravel lot, but most are missing their speakers. Some rusty remnants are there, but they don’t work, the theater apparently having switched entirely to FM sound several years ago. The snack bar is very good, with better prices than you’d expect from a theater. (a small popcorn and a box of Nerds cost only $3.50) Also, an unexpected bonus, they have a rack of flavored popcorn seasonings you can shake on for free. The video game area was anemic and disappointing, but could be easily improved by a pinball machine and some classic games such as Pac Man, Asteroids, Galaga, Centipede, etc. Before the feature they ran a rather gloomy PSA (?) commercial (?) that showed a bunch of dark, crumbling ozoners and stated that almost all the money from ticket sales goes to the film companies for film rental, so almost all of the theater’s profit comes from the snack bar. Of course, this is true in most theaters, but I never saw a theater be so blatant with “Ok, if you don’t want us to go out of business, go get some popcorn. NOW! Why are you still in your car?” But, as I said the snack bar is well stocked with loads of different things, much more than your local 20-plex, and at better prices, so I don’t mind. Ok, you can bring in your own food but you have to get a “food pass” (kind of like an admission ticket for your food) :–) for $5 at the box office.

My husband and I went to the Aut-O-Rama drive in recently and had a erally unsettling experience. We drive a small SUV and when we bought our tickets at the Box Office we were told that we could park either in the first three rows or behind the orange cones. When we got to the parking lot an attendant stopped us and told us that they were no longer parking people in the front rows we would have to go to the back. We proceeded down towards the back but did not see any orange cones. The two vans that were in front of us in line pulled into rows ahead of us, we saw them pass employees of the theater and so we pulled into a row that was a bit further back. As we moved down the row, an employee told us we had to park in the row behind us. We did that. When I got out of the car to get our infant from the back seat yet another employee came up and told us we had to move back another row. We countered that another employee had told us to park here, but he said “I don’t care, you need to move”. My husband said he did not appreciate the mixed messages, could we just get a refund. The employee said fine, “go to the box office”. We pulled around the lot, returned to the box office with our card and receipt explained the situation and asked for our refund. They called on the radio to get the story from the employee who said “they’re just mad because they don’t want to park behind the cones”. We said, no, that wasn’t it, but we wanted a refund and weren’t coming back. The women at the box office were apologetic but explained they couldn’t process a refund from there; we would have to go to the concession stand. At this point we proceeded to the concession stand. The parking attendant again tried to stop us to tell us about the front rows being closed, but we did not stop as we were not parking. I went to a cashier in the concession stand and explained that the box office sent us there for a refund. The young lady then turned to another man who began yelling, “NO, you’re driving crazy in my parking lot you need to leave theater”. I gave him a questioning look and said that’s not true. He continued yelling that we were driving 30 miles an hour and there were kids around. He continued yelling as I quietly left and met my husband in the car. Another man approached the car and said we had to leave. My husband asked to see the manager. The man said, no, you have to leave. Then, told us that he was a police officer and was telling us to leave. (This man was dressed in a drive-in sweatshirt with no identifying markings & was smoking in my husband’s face). My husband asked why it was unreasonable to ask to see the manager. This man said they were going to call the police and we would be arrested for trespassing. We are intensely frustrated, and deeply saddened by this experience. We had frequented this theater ten or more times a summer and had been doing so for the past seven years. After this experience however, we will never return. The owner/operators of this theatre are terribly unfriendly and I highly recommend that people spend their hard-earned money elsewhere.

Slfergus, how were you and your husband trespassing, the drive-in was open and operating!!? I think your freedom of speech rights, might have been disrepected too? Just bad employees i think?