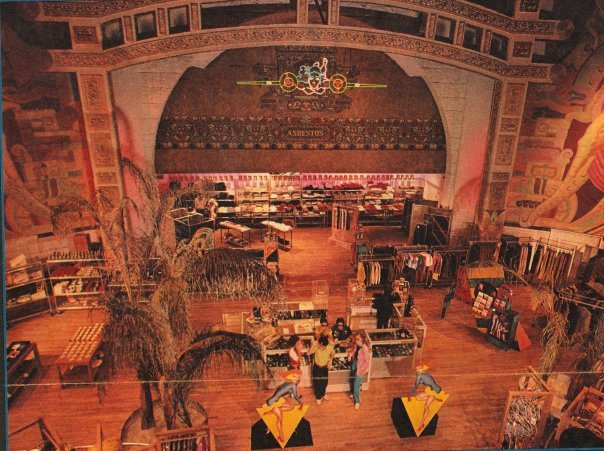 Beverly Theater was designed in the Indo-Chinese style and opened May 18, 1925. It was equipped with a Wultizer organ. It was later remodeled into an Art Deco style theater. The Beverly Theater has a large Taj Mahal-type dome, which is located above the theater’s facade.

In the mid-1970’s, Beverly Hills had a number of theaters. But with the noise & traffic generated by such films as “Tommy”, “Woodstock”, and others, local citizens began to complain.

Responding to these local complaints, General Cinemas closed the theater in 1977. It was later gutted to become a store. At the time of the closing, you could still see what the inside looked like. To get a small look inside this once outstanding theater, watch the film “Xanadu”.

After many years of housing a bank, the Beverly Theater was sadly demolished in August of 2005 to make way for new development.

Also the AKA: Fox Beverly Theatre

I was looking for Loews Beverly Hills. Please tell me that this isn’t what’s happened to it. I’m on the east coast and haven’t been to California since 1978. However, in 1970 I had a Loews pass and went to the opening of “On A Clear Day You Can See Forever” there and it was a beautiful theatre at that time. It seems that there’s a conspiracy to demolish all the beautiful theatres in the U.S.

My first time here was in 1972 or 1973. They were playing the double feature “Casablanca” and “Play It Again, Sam”, and since that just happened to be my first time seeing BOTH films, that was an evening never to be forgotten. Saw “Born Yesterday” there a couple of years later, probably just before the theater closed and became a retail space. I seem to recall it was a lovely place, and I wish I’d frequented it regularly.

My father was one of the projectionists at this theater from the early 1960’s until it closed. I grew up in this theater, literally. It was also where I served most of my apprenticeship as a projectionist, as well as working on the floor as an usher. The first movie I remember seeing there was “Those Magnificent Men In Their Flying machines”, the theaters first 70mm presentation after it was remodeled. Before it was owned by Loew’s, it was owned by a small LA circuit called Steinway ( I believe), who purchased the theater from Fox West Coast. Loew’s sold the theater to General Cinema. Notable pictures that were first run, “hard ticket” at the Bev were “Oliver”, “The Bible…in the beginning” and “Young Winston” along with Magnificent Men. it was also the site of the premiere of “That’s Entertainment”.

BobSe , I think you are thinking of Statewide Theatres. So your father worked with Bernie Rubin at the Beverly Thetare?

Statewide sounds right. It was the Stein family. No, he worked with Heber Amstutz.

It’s very probable that he worked with Rubin also. He was the swing man for many years before taking the full time job after Heber went to the Avco.

As can be seen in this photo uploaded by Senorsock, the Beverly Theatre’s auditorium kept its East Indian theme even after it had been converted into a retail store. The 1960 renovation pictured in the Boxoffice article Tinseltoes linked to was, not surprisingly, Midcentury Modern rather than Art Deco, and the major changes were done primarily to the facade and lobby. The boxy black entrance in this photo uploaded by RonP was built when the building was converted to retail use, and replaced the flat modern marquee seen in the Boxoffice article.

Below website also has multiple images of The Beverly. Copy & paste to view.