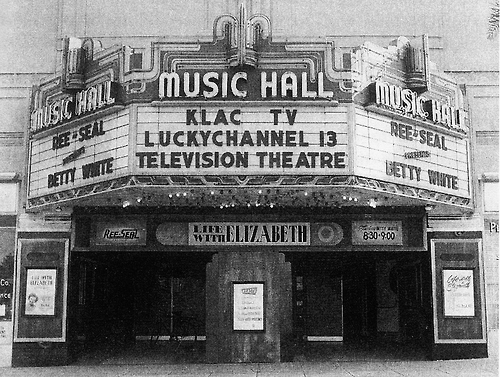 Originally opened as the Elite Theatre on April 24, 1937 with George Brent in “God’s Country and the Woman” & Chester Morris in “I Promise to Pay”. It had a seating capacity of 824 and was designed by architect Wilfred B. Verity. It is just down the street from International Creative Management and The Academy of Motion Picture Arts & Sciences.

On August 8, 1945 it was renamed Music Hall Beverley Hills, playing “Story of G.I. Joe” starring Burgess Meredith. Between 1950 and 1956 it became a TV studio housing “Life with Elizabeth” with Betty White in the early-1950’s and “The Liberace Show” from 1953 to 1956. It was reopened as a movie theatre by the Walter Reade circuit in 1956. It was renovated in 1960 to the plans of architect Arthur J. Drielsma. In 1974 it was taken over by Laemmle Theatres. It was later tripled and renovated in the mid-1990’s. In 2005, the seating capacities in the three auditoriums were;148, 102 and 259. Its Art Deco style appearance has remained to this day and continues to be a local favorite showing independent films. It was threatened with closure in early-2011, but got a least a one year extension on its lease. Laemmle Theatres closed the Music Hall Theatre on November 21, 2019.

It was taken over by independent operators (former Laemmle employees) and reopened on November 29, 2019 as the Lumiere Cinema at the Music Hall. It was closed in March 2020 due to the Covid-19 pandemic. It was announced in February 2021 that Blue Fox Entertainment had taken over the theatre and it reopened. Planned renovations would begin at a later date..

Architect J. Arthur Drielsma designed the renovation of the Music Hall for Herbert Rosener that is featured in the 1960 Boxoffice article that Tinseltoes linked to earlier. The project involved completely rebuilding the gutted interior as well as redesigning the front.

So far, Laemmle has managed to keep this house open a year beyond its reported closing date. The slack real estate market probably has something to do with that.

I’m surprised this venue is still around.

I go often and have yet to see the theater full. They can’t be making any money. To save this theater, that sits on desirable Beverly Hills land, formulate a plan now before it becomes actively threatened. By that time, it’s often hard to turn things around.

I quite agree. Every time I have been by the Music Hall or even attended a rare screening there, the auditoriums are almost bare. I heard that Sharon Stone and Faye Dunaway have frequented the theater, but never see them there.

At its peak in the mid- to late-1960s, the Walter Reade Organization operated two flagship movie houses in Beverly Hills, California. The Beverly Hills Music Hall on Wilshire Boulevard hosted many first-run foreign films and prestige releases, including the world premiere of John Cassavetes' “Faces.” The Music Hall was the exclusive exhibitor in the region of the 1968 Russian production of “War and Peace.” (see photos) All the movie industry elite turned out for that long-running “hard ticket” engagement, including Katharine Hepburn, Warren Beatty with Julie Christie, Mike Nichols, Joanne Woodward, James Coburn and scores of others. Theater staffers were required to wear Russian tunics on duty, and the doormen wore full-length Cossack coats, fur hats and accessories. The second Walter Reade cinema in Beverly Hills was the Beverly Canon, which also exhibited the company’s licensed foreign films and was the site of world premiere screenings, including Peter Bogdonovich’s “Targets.”

This evening Laemmle Theatres will cease operation of the Music Hall Theatre in Beverly Hills.

Laemmle Theatres President Greg Laemmle said, “It has been my family’s privilege to operate the Music Hall for 45 years but it’s time to end our stewardship. For the sake of efficiency, we plan to use the other screens in our circuit to provide a platform for the types of films we’ve been showing in Beverly Hills.”

Laemmle began operating the Music Hall in 1974 and has shown literally thousands of movies from all over the world. Bergman’s SCENES FROM A MARRIAGE was one of the first films we played there. LA CAGE AUX FOLLES and MY LIFE AS A DOG were hits in the 70’s and 80’s.

According to CinemaTreasures.org, the Music Hall first opened in April 1937 as the Elite Theatre, with seating for 824.

There is a distinct possibility of a renaissance, and movies and moviegoers will return to 9036 Wilshire Boulevard, but if it happens it will be after a hiatus and with different operators.

Music Hall AP The historic Music Hall Theater in Beverly Hills has been acquired by film distribution company Blue Fox Entertainment, which will renovate the three-screen complex for a planned October reopening.

Blue Fox, a 6-year old company based in Century City, sees taking over a long-term lease on the theater as a natural extension of its independent film distribution and sales business. Blue Fox owner James Huntsman says “People are going to be blown away” when they see the new design for the theater, which is the only multiplex operating in the city of Beverly Hills.

Built in 1936 and opened in 1937, the art deco landmark had been part of Laemmle Theaters until 2019, when a trio of Laemmle vets took over briefly to run it as the Lumiere until the COVID pandemic closed down theaters.

Huntsman says there’s a need in Los Angeles for space for premieres, special screenings and four-wall bookings. The Blue Fox Theater will also program foreign and arthouse films from Blue Fox and other distributors, and Huntsman hopes the remodeled theater will prove attractive to bookers from the most prominent specialty labels.

“The renovation is quite extensive,” Huntsman says, and will include an expanded lobby and totally reimagined concession stand with unique offerings of beer, wine and food. All three auditoriums will be retrofitted with new screens and fully reclining seats.

The centrally-located theater on Wilshire Boulevard at Doheny will be a natural fit for Q&As and panels and other special events, according to Huntsman, “We want to connect filmmakers with the community.”

The largest auditorium currently has a 35mm projection system which will be retained for use during special screenings.

Designed by architect Wilfred B. Verity, the theater had been in continuous use until the pandemic, and also served as a studio for KLAC in the 1950s, where Betty White’s first sitcom, “Life With Elizabeth,” and “The Liberace Show” were filmed. It was originally known as the Elite and became the Music Hall in 1945.

“We believe there is strong demand for ‘a night at the movies’ and are fully committed to invest in its future,” Huntsman says.