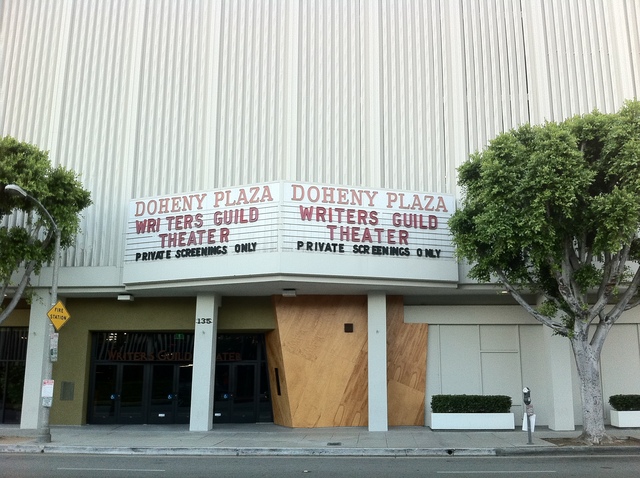 Located just around the corner from the Music Hall Theatre on Wilshire Boulevard. This theatre was remodeled in the mid-1990’s. When it opened in July 9, 1970 as the Doheny Plaza Theatre, it had the standard 1970’s curtains all over the walls look, and some of the hardest seats in town. It is now one of the best places to see a movie in town.

One problem for the public, though, you must be a member of the Writer’s Guild or be a guest to go to a screening here. This theatre is used for Membership screenings, studio rentals and other Hollywood screenings.

The Rubins have been in there forever.

They are still there? OMG Guess that explains why I am not there. Oh well, gotta find a new plan as the snow flies around me. My car got stuck, and I had to walk up the dirt road to my cabin. It is really snowing like crazy here tonight.

While the Wilshire-Doheny Plaza complex in which this theater is located was designed by Maxwell Starkman & Associates (see my comment of June 29, 2008, above), the February 23, 1970, issue of Boxoffice Magazine attributes the design of the theater itself to George T. Nowak, who was also the lead architect of the original, single-screen Lakewood Center Theatre.

From 1975 to 1979 I lived within walking distance of what I knew of as the Writers Guild Theater, when it ran second-run (or even somewhat older) titles for $1 or $2 admission for the general public. Maybe that was just on certain nights. But it was a wonderful find. I do remember the curtains on the walls look, and maybe even the uncomfortable seats — though in my opinion the Vagabond took the prize for hardest seats in town. A few of the films I recall catching up with here: “French Connection II”, “Give ‘Em Hell, Harry”, “Missouri Breaks”, and “The Reincarnation of Peter Proud”.

I FOUND A SMALL POSTER THAT I AM TRYING TO DATE. IT ADVERTISES THE WEST COAST PREMIERE OF A 1936 FILM, “MARIJUANA, WEED FROM THE DEVIL’S GARDEN” ON SEPT 13 AT 9PM AT THE NATIONAL CINEMA’S DOHENY PLAZA. ANY HELP DATING THIS WOULD BE APPRECIATED.

Do members get reserved seating?