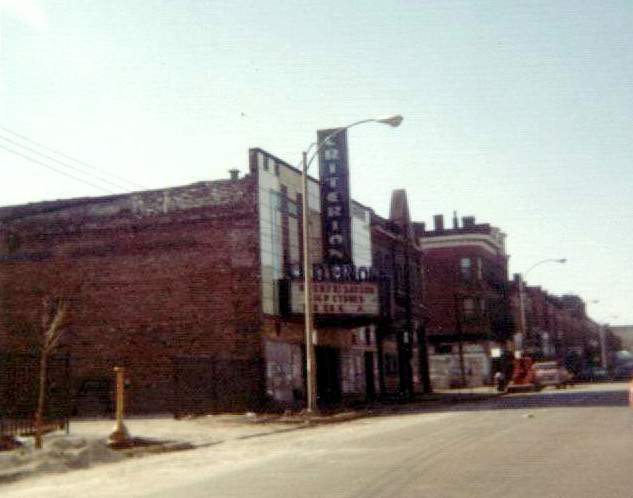 The Criterion Theatre was opened by July 1910 and was owned by a Greek family. It was located in a part of St. Louis that was heavily populated with African-Americans. It was remodelled in 1938 to the plans of architect O.W. Stiegemeyer. It made headlines in 1939 when it was picketed by the Colored Cashier' Society. They wanted better employment opportunities. The theatre survived until 1966, when it closed as a movie theatre.

For some time a church occupied the building. Eventually it was boarded up and became a dilapidated structure. Vandalism plagued the building until a police substation was built across the street. It was still in the best shape of any of the old North St. Louis Negro theatres, but was demolished prior to 2007.

While there was some talk of turning the Criterion into an African-American history museum—even after a whole corner of the auditorium crumbled—the project was abandoned and the theater was demolished. The Criterion’s vertical sign, with its streamlined lettering, was one of the most beautiful in town.

The Criterion at Jefferson(?) reminds me of the now-demolished Regal Theatre up the street near Grand when the city had it knocked down sometime in 2006-7. I took pictures of it; inside and out..though it would have been dangerous to step inside it. It had this huge gaping hole in the side wall. It was horrible to see this bit of history lesson that nothing last forever. I am also asking if anyone know where the Comet Theatre is in location to the Criterion. I am confused about these two theatres. Patrick

I am sorry. I am in error. Is it the Comet Theatre at Jefferson that I have confused with the Criterion? Patrick

Thank u Chuck1231
Chuck, I am not sure that the Comet was at Sarah and Vandeventer? Patrick

I have copied the image of the Criterion to my Pictures folder.

I must admit that if there was ever a cluster of theatres that confused me, it was this one. The Comet and Criterion, I had actually seen; including the demolished Regal Theatre.
The Roosevelt and the Douglas, I have not and there are a few more that have not been covered as the Beaumont Theatre which I am not sure ever existed as claimed by an African American woman I had met at a meeting at Catholic Charities in 2006 who said she saw movies there. Does anyone know if there was a Beaumont Theatre? – Patrick

I remember going to the Marquette Theatre in the 50’s and 60’s. It was located on Franklin Avenue near Carr Square Village. We spent many a Sunday afternoon there after church and supper. In those days movies ran continuously so we would arrive at any point during the movie then stay through the next run. I can still hear my sister saying “okay, this is where we came in – are you ready to go?” I don’t know when the Marquette closed. On rare occasions, we went to the Criterion but it was a longer walk and in those days, we stayed close to home.

The Criterion Theatre in St. Louis was being remodeled, with plans by architect O. W. Stiegemeyer, according to the September 17, 1938, issue of Motion Picture Herald.

Ads begin in July of 1910 and structure was a converted storage facility named the Louisiana Storage Company operating from 1901 to 1909.

Sometime in the late 90’s I discovered this theater while driving and it did in fact have a huge gaping hole in the side wall and the front pretty much still looked then, like the above picture.

I had decided I wanted one of the seats I could see from the hole so I got a buddy to come back with me to help me get one. Unfortunately, the seats were beyond saving due to age and weather getting in through the hole in the wall and all the holes in the roof but me and him explored other areas.

The screen was still there, but ruined, as was the sound system. Wall and ceiling collapse rubble was everywhere.

We went in to the projection room to see what was up there but all the equipment was gone and the ceiling had collapsed.

I went out a trap door onto the top of the marquee but didn’t stay long because the police station is right across the street.

I dug around the projection room rubble and found several feet of film and some empty film cans. I also found a boiler maintenance book from 1953 and a paper label Vess Root Beer bottle in mint condition. I took all that with me and some Art Deco glass tile that fell off the front onto the marquee top. The film that I could see had some nice big church in it but when I tried to gently clean the other frames, it started to fall apart and the film was coming off so I stopped.

I always wanted to go back and check out more, but my friend was spooked and wouldn’t go with me again. And I couldn’t get anyone else to go with me.

I had wanted to salvage more out of there but never got the chance. Which is a shame because I think when they finally tore it down, everything that was left got destroyed and hauled to the dump.