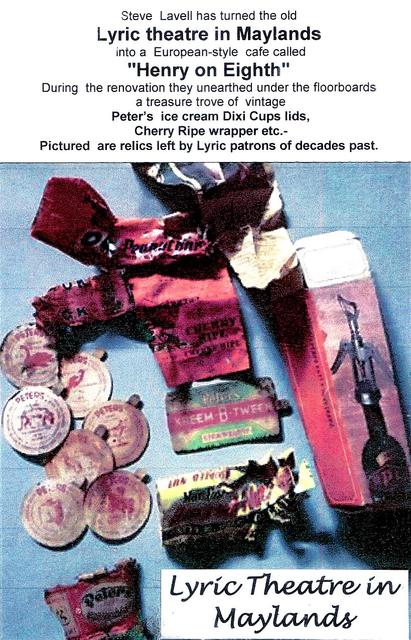 The structure known as the Lyric Theatre, was built to the order of Mr. H.C. Leister, who had been a resident of Maylands for some years. He was also the original exhibitor at the theatre. The Lyric Theatre was opened on August 31, 1923 with the Universal Picture silent comedy movie “The Flirt” starring George Nichols. With a 1,000-seat capacity, the Lyric was operated by various operator throughout the years.

The Lyric Theatre was closed in June 1961. The fittings were dispersed at auction.

By 2019 theatre building is run as a restaurant named “Henry on Eighth”.

There used to be flats and then a pool/snooker hall in the upper section(stage area?).

I think the flats and pool/snooker hall might have been where the shops are at the Eighth Avenue side of the building.

Part of the building(at the front, and above?) is now a cafe/bar(Henry the Eighth)(British food?).

There is also a cafe(Milkd) at the front of the building to the left of the Henry on Eighth. The liquor store(BWS) is still there too, behind the restaurant along the side of the building.

*“The Lyric Theatre Maylands” is important for its association with cinema, by far the most popular form of entertainment in the early twentieth century, which provided entertainment to the people of Maylands and surrounds for more than 38 years.

*The Lyric was the heart of the community. More people would pass through the Lyric than any other building in Maylands. By the 1940’s cinema had come of age. It was a time when most of the population went to the movies, at least once, sometimes twice a week.

Architecture – “The Lyric Theatre” Maylands is an early and intact example of an important cinema building, constructed during a decade of unprecedented growth in the Motion Picture industry. The facade of the building is two storied in height, with stucco ornamentation in the Classical style. The upper storey, (five) windows are round headed, with modest archivolts suspended by slender columns. The balcony balustrading and stairway is still intact. The fibrous plaster paneled ceilings, and the ornate columned square proscenium, provide a unique architectural picture frame, with traces of staggered Roman / Greek decorative influence. The theatre seated 1000 people.

*If any building in Maylands has a story to tell it’s the Lyric Theatre. The struggle to stay open during the Great Depression comes to mind, when in desperation management introduced Roller Skating, Dancing and Cabaret to supplement the movies.

*During World War Two “The Lyric Theatre” was the center of many loan rally functions. These were held by “The Maylands War Loan Committee” which encouraged Australians to invest in war bonds. Substantial funds were collected on these occasions..

*MAYLANDS. ANZAC ENTERTAINMENT – During the war years and after “The Maylands Sub Branch of the Returned Soldiers” held numerous functions at “The Lyric”. While the theatre was often used as a fitting termination to the solemnities of Anzac Day.

*The Lyric Maylands is significant for its association with Herb Robinson who operated a number of companies and cinemas in Maylands, and who will be remembered as one of the “Fathers of the West Australian Cinema Industry”. The story of Herb Robinson is one of achievement. Born in Perth April 9, 1909 to Mary Ellen and Richard Herbert Robinson. His father was killed in action in France when he was only eight years old. in April 1918 Robinson attended St Patrick’s Boys' School, and after leaving school worked as a clerk for the W A Government Railways. In 1933 he and his sister opened the Roxy Gardens, Maylands. The following year they took over the nearby “Lyric Theatre”, also in Maylands. Uniquely remaining owners of both theatres until their eventual closure in the early 1960s because of the inroads of television. On 16 July 1940 Robinson enlisted in the Australian Army during World War II, serving with the 5th Australian Infantry Troops. Then on 8 August 1942 he married Annie Mary Eluned Morgan, resulting in two daughters. Robinson was discharged from the army on 12 December 1945. He was elected to the Perth Road Board in 1951, and from 1959 to 1961 served as its chairman. Robinson also served as president of the Motion Picture Exhibitors' Association of WA, from 1951 to 1956. When the Perth Road Board became the Shire of Perth in 1961 Robinson was elected to shire president, serving in the position until he left the council in 1963.

*Political career – Herb Robinson was elected to the Legislative Council in 1962, representing the three-member Suburban Province. Robinson was a Justice of the Peace from 1951 till 1985. In retirement he moved to Canberra, passing away in July 1990 at the age of 81. – Vale H. R. (Herb) Robinson. Footnote: The Robinson family were hands on theatre owners and show people. Most Saturday nights you would find a member of the family at either the Roxy or the Lyric acting as welcoming hosts in the old style, by positioning themselves at the theatre entrance door, and then fare welling the patrons as they departed.

*OPINION – “The Lyric Theatre Maylands” can never be replaced, and it is important that every member of the Maylands community rally to protect the cultural memory of this heritage structure. Potentially “The Lyric Theatre” could be restored to it’s original glory. The size and location of the building would make an excellent Community Arts Center – Contributed by Greg Lynch –

During the 1980’s and 1990’s there was a op shop(Salvation Army)(i went inside it then a few times), in the back of the old theatre building(behind the shops on the street front), entered from the car park(which became the liquor store(BWS), now the restaurant(Henry on Eight).