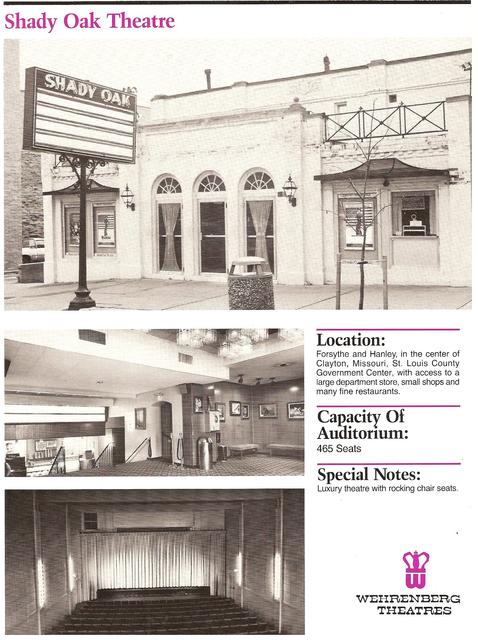 By looking at this theater, you wonder how it got the name of Shady Oak. It is surrounded by nothing but concrete and steel buildings, but it started as an airdome shaded by oak trees, thus giving the airdome its name.

An indoor theater opened next to the now long-gone airdome on May 3, 1933 with Eddie Cantor in “The Kid From Spain”.

The Shady Oak Theatre, located in the St. Louis suburb of Clayton at the intersection of Forsyth Boulevard and Hanley Road, has the warmth of an intimate cozy theatre. It has always shown movies up it’s closing.

It was part of the Arthur Enterprises Inc. chain until they went out of business, and then operated until its closing in 2000 by the Wehrenberg Theatre chain.

The theatre was a rectangular shape with some Art Deco style touches, mainly the wall lights. The lobby was sectioned into two parts, the main entrance plus the concesssion stand. The lobby originally had concrete walls but was paneled in a 1973 remodel. The ceiling holds mirrors and cube modern lights. The lobby’s second section is down a flight of stairs. The concession stand attracts attention as the main focal point.

The Colonial-style brick facade has three doors with arches and a small potico which stretches over the ticket booth. Although the front gives the appearance the theater is only one story it is not. The lobby has one story and further back stands the auditorium with it’s balcony. The balcony held a major advantage for the Shady Oak of the 1980’s. Many celebrities attended the theatre because people wouldn’t bother them and they could sit in the small balcony. Many St. Louis Cardinals players would attend the Shady Oak because of the privacy.

For many years the Arthur Chain operated the Shady Oak as an art theatre but when the Wehrenberg chain took over they changed to format to first run.

The building with its quaint and warm atmosphere was closed in 2000, and sat unused collecting dust for several years until it was demolished in November 2008.

This is a little late, but I wanted to commend Wintermute on her apparent valiant efforts to buy her hometown theatre, and keep it operating as such. It’s a shame her efforts met with such resistance by her business partners.

I used to love the Shady Oak in the days when I was a grad student at Wash U from 1988-91. My girlfriend, who later became my wife, and I saw saw a lot of great movies there during study breaks. I have not thought about it in years. Today, during a divorce mediation session with that same woman, I pulled out a line from a movie we have often quoted to each other over the years — When Harry Met Salley — to lighten the sadness of the end of a twenty year relationship with the woman I love… .

… So it is just amazing how the internet works to connect us with lost memories and tie up loose ends. Today, one of the saddest days of my life, I think of an old movie line (Marie to Jess: “I want you to know that I will never want that wagon wheel coffee table”), then remember that I first saw that movie 20 years ago with the very woman I quoted it to today, then remembered that we saw it on a study break date at the Shady Oak, then found out through this search that the Shady Oak — like my marriage — now exists only in memory. I guess it proves what the wise man said: “It all rolls into one and nothing comes for free there’s nothing you can hold for very long.”

Does anyone know the story about the ghost that supposedly haunted this theatre?

The Shady Oak Theatre was a Fanchon & Marco operation when it got a new manager named Howard Albertson in 1952. Three years later, Boxoffice Magazine ran a two-page spread about the Shady Oak and the unusual policies Albertson had established at the house. A photo of the theater was featured on the cover of that issue of Boxoffice as well.

The Howard Albertson article should be cut and pasted into the “Commentary” section as he had some good things to say about running a movie house.

Continuing the line of bittersweet experiences at this theatre, on my last visit to this theatre in Christmas 1984 my father and I saw “Beverly Hills Cop” on a Saturday night. It was the last movie I saw with my dad. He was killed in September 1985.

I seem to recall posting this info on this page before but I guess it got deleted (hopefully unintentionally).

Here are updated links for the Boxoffice Magazine items mentioned in my earlier comment:

Photo of the Shady Oak Theatre on the cover of Boxoffice, September 24, 1955.

The article abouttheater manager Howard Albertson begins on this page of the same issue.

They should probably have called the Shady Oak the Melancholy since it seems to hold both happy and sad memories for quite a few of us, it seems.

I remember going here with one of my life’s two unrequited loves for “Children of a Lesser God” in 1986. I was also there for a movie with one of my former girlfriends in the early 1990’s.

This was a pretty straight-forward cinema, but low on frills. No sophisticated projection or sound. So, what you got was pretty basic. The design of the place was what you most remembered.

Other films I remember here were “Star Trek II: The Wrath of Khan” and “Face/Off.”