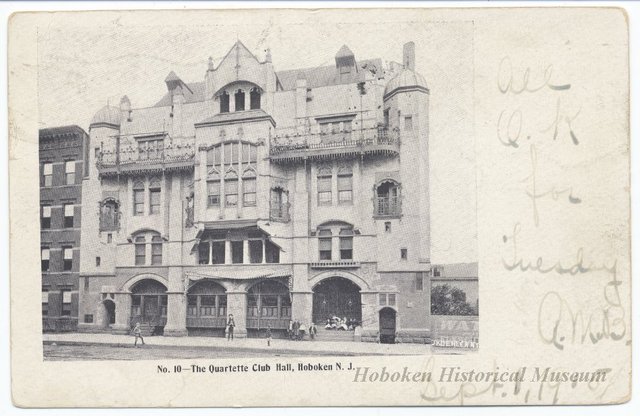 Opened in 1891 as the Quartett Club, it stood adjacent to the Elks Club, which still stands in 2015. It became the Gayety Theatre in 1909 and by October 1915 it was renamed Strand Theatre. The theatre closed around 1924. An apartment building was built on the site.

That should be the Quartett Club (double t at the end).

Uploaded photo as the Gayety.

Numerous documents, including several photographs, related to the Quartett Club are available online from the Hoboken Historical Society at this web page. A couple of photos depict the building after it was converted into the Gayety Theatre, and one depicts the ceremony for the laying of the cornerstone of the building on October 28, 1891. The description of that photo says that the building became the Gayety Theatre in 1907, and that the apartment house now on the site was built in 1931.

The October 29 issue of The New York Times had an article about the ceremony (online here,) and revealed that the building was built by the Masonic lodge. The formal opening of the club’s new building on December 10, 1892, was announced in the following day’s issue of the New York Press.

1915 is both the last year in which I’ve found a Gayety Theatre in Hoboken mentioned in trade publications, and the first year in which I find a Strand mentioned, so that must be the year the house was renamed. An announcement that the Gayety had been sold to an unnamed New York company who planned extensive alterations to the house appeared in the May 8, 1915, issue of The New York Clipper. I found the Gayety mentioned as late as August, 1915, but the Strand was operating by October that year.