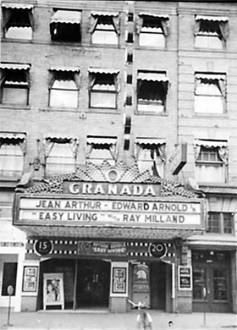 From 1937 and into the 1950’s the Blues Bouquet was known as the Granada Theatre and played second-run A movies or first-run B movies and as television began to take hold they would have dish night or some type of give-away to attract customers. Local history resources say that the Granada Theatre, which was built in 1910, was once named the New Boz Theatre and then the Strand Theatre and at one time it had a hotel and bordello upstairs but all of this is beyond my years of expertise. Other downtown theatres around this time were the Boise Theatre, the Rialto Theatre and Rio Theatre, which sat side by side, and the Ada (Egyptian)Theatre and Pinney Theatre, Boise’s premiere houses.

Since 1975, the building has been home to the Blues Bouquet, which has been called the best place to hear live musical performances in Boise. Passing the building, you would never know that it once was a theatre, as the marquee has been removed, but the original lobby tile and other clues such as its closed balcony remain inside.

The club is still going, although the related link no longer works.
http://tinyurl.com/47da3c

This is from Boxoffice magazine in December 1951:

BOISE-The Granada Theatre has reopened with a new policy and Roger Mendenhall, owner of the Granada and Pinney theatres, announced the appointment of Jack Rhodes as manager. He will be assisted by Bob Wilson. Rhodes managed the Natatorium last summer with the assistance of Wilson. The Granada was closed during the summer for renovation but is now operating daily.

There was a Boz Theatre in Boise, so the local source saying that this house once had that name could be true. A history of Idaho published in 1914 said that W. Fred Bossner arrived in Boise in 1909 and began operating his first Boz Theatre.

In 1910 he opened the New Boz Theatre, which was exclusively a movie house and considered the leading such enterprise in the state. No address is given, so I can’t be sure it was the same theater that later became the Granada. The only other mention of the New Boz Theatre I’ve found on the Internet is one saying that, in 1911, noted feminist and radical Emma Goldman gave a speech there.

According to a tourist brochure about downtown Boise (PDF here), the building now housing the Blues Bouquet was built in 1910. The New Boz Theatre was on the ground floor, and the upper floors housed the Manitou Hotel. The Blues Bouquet moved in in 1975.

The brochure doesn’t mention any other names for the theater, but here is a 1937 photo from the Idaho State Historical Society with the name Granada on the marquee.

I agree with Stephen that this house should be listed as the Granada Theatre. If it were still set up as a theater I’d say go ahead and list it under the current name, even if it was strictly a live music venue, but as far as I can tell from the photos on the Internet, it has been completely reconfigured as a bar with no theater seating at all. Even the stage looks like a typical bar stage, not a theater stage.