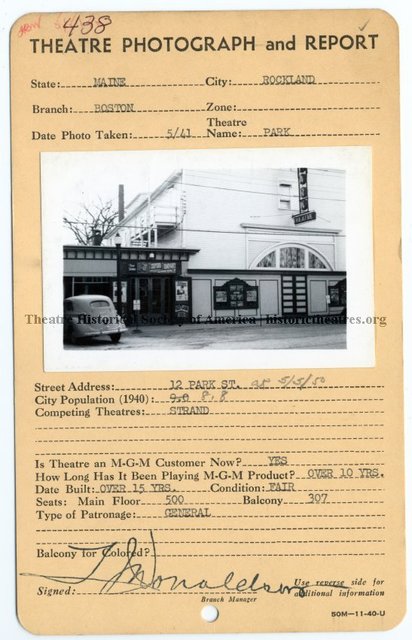 The Theatre Historical Society archive has the MGM Theatre Report for this theater when it was the Park; it’s Card # 438. Address is 12 Park St. There is an exterior photo taken May 1941. Condition is Fair. The report says it’s over 15 years old and was showing MGM product. It had 500 orhestra seats and 307 balcony. The 1940 population was 8,800.

“A c.1913 photo of the Rockland Theatre that was located at 12 Park Street. The theatre opened in 1910 and played moving pictures and featured Vaudeville acts. In 1916 the business changed hands and became the Park Theatre. In 1926 the Park Theatre caused a stir when it held an American Venus Contest in which female contestants were required to wear bathing suits on stage. In 1952 the business changed hands again and became the Knox Theatre which withstood the fire of 1952. The Knox Theatre continued to provide entertainment until 1962 when the building was torn down.”