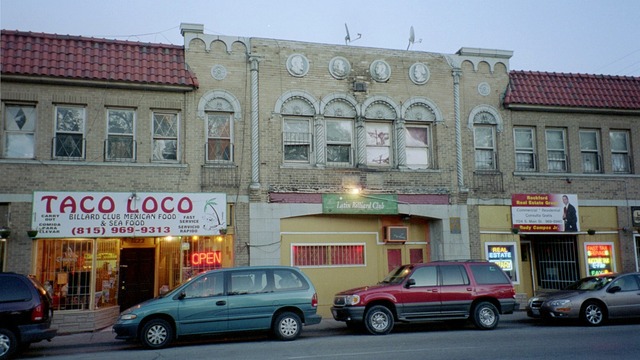 Opened on February 4, 1928 with Charles Nungesser in “The Sky Raider”. The Capitol Theater was designed in a Spanish Colonial style on S. Main Street, faced with buff-colored brick, a set of four arched windows over the main entrance, terra-cotta medallions just under the cornice and a deep red Spanish tile roof. Inside the Atmospheric style auditorium, ‘stars’ twinkled in the sky above.

It closed as a theatre during the 1970’s, and the former Capitol Theater served as a billiard hall and Mexican restaurant, Taco Loco. By 2019 the building was vacant and abandoned, deteriorating fast.

Do you think that car has been sitting in front of the theater since 1928? It may have picked up a few tickets since then.

how much would it cost to purchase the theatre and what would the terms of use and service be?

The Capitol had a three manual, nine rank Kilgen theatre organ, Opus 4008. Ranks were Bourdon/Concert Flute, VdO, Diapason, VdO Celeste, Saxophone in the Main (probably right)chamber; and Tibia, Tuba, Kinura and Vox Humana in the Solo chamber on the other side of the theater. Percussions included Glockenspiel, Xylophone, Marimba and Chimes. Traps on Accompaniment (bottom) manual keyboard were Snare Drum, Tambourine, Castanet, “Chinese” Wood Block and Sand Block. Traps on Pedal keyboard were Bass Drum/“Tympani” Roll and Cymbal. Only the Accompaniment manual had second touch. Another Kilgen model UO 20, nearly identical to the Capitol’s is still playing where originally installed, the Canton, Ohio Palace Theater. The Kilgen organ from Rockford’s Capitol Theater is still playing in a private residence in nearby Pecatonica, IL.

This opened on October 4th, 1928. I have posted its grand opening ad as well as two photos in this theatre’s photo section.

If this theatre actually operated until 1970 I would be very surprised. I was going to movies a lot in the late 1960s and I don’t recall it being open then. To my recollection, downtown had the Coronado, the State, the Times, and the Midway.

My great grandpa Tony Domino and great great uncle Ted Ingrassia built and opened the Capitol Theatre on Saturday, February 4, 1928. My grandma Maryjo Domino Pritz just turned 88 this year and reminisces on her time living above the theatre as a little girl with her parents and going out on the marquee looking up at the stars. Sadly the Great Depression hit and they lost the theatre. The first Italian grocery store in Rockford, Il was next store to the theatre, Ingrassia grocery store which my great great grandpa Salvatore Ingrassia owned and the tile is still present to this day. The only item my grandma was able to take from the theatre was her doll house doll and a suramic deer.

“In truth, the Capitol Theatre is not much to look at these days. Literally a shell of its once romantic self, the façade is dull with random wires dangling from where the marquee sign once prominently hung. Instead of a glittery movie and vaudeville house standing out on the 1200 block of South Main Street, it is a dreary sight. For 30 years, it was a jewel in the half-mile stretch of South Main where the first businesses catering to the newcomers from Italy located. At its peak when it attracted the Italians and others who lived in South Rockford, you would find Italian-owned or operated businesses among them grocery stores run by the Ingrassia, Zammuto, and Castrogiovanni families, Sagona Pharmacy, the Abruzzo’s Three Trees restaurant, Paris Garage, and, upstairs from the Capitol, the dental office of Dr. Zaccaria. If you look beyond the flaws, you can see glimpses of the Capitol’s brilliance today. The red tile on the Spanish-style roof, the arches over the windows, the terra cotta medallions under the cornices, original wrought-iron railings, the four cameos of three brilliant creative talents and President Calvin Coolidge. Wait! What is Calvin Coolidge doing with William Shakespeare and opera stars Enrico Caruso and Giuseppe Verdi? Actually, he’s not, contrary to some histories. The fourth face on Rockford’s Mt. Rushmore is Anton Rubinstein, pianist and composer. Despite its condition, several people are eager to get behind the idea of returning the Capitol into a functioning venue for films, shows, recitals, and neighborhood and ethnic gatherings. “I think of what a beautiful building it once was,” said Fifth Ward Alderman Venita Hervey, whose district encompasses the theatre. “I believe we can salvage it.” “Those cameos … Verdi, Caruso … they are priceless,” said Sue Lewandowski, president of the Ethnic Heritage Museum, located directly across the street from the Capitol. “They mean so much. And it’s a way for people to remember how beautiful that part of town was, and how active it was.” “I think it’s a great idea,” said former Rockford resident Shirley Martignoni Fedeli, who has a family tie to the theatre. “It’s in a neighborhood of history. This is where Rockford really began.” Built by Anthony Domino and Theodore Ingrassia for $175,000, the Capitol Theatre seated 1,000 and was opened in 1928.

A Capitol idea - Local preservationists hope to restore historic South Rockford theatre It had a Spanish appearance, even though it was located in an Italian neighborhood. The interior was ornate with Spanish décor and stunning overhead effects. Stars were cut out of the ceiling and a cloud machine was installed to give patrons a real sense of being in a Spanish garden. It featured a wide stage with a large orchestra pit – used often in the early days for vaudeville shows – a Kilgen pipe organ and Rockford-made Haddorff Grand Piano. When the Capitol Theatre opened on February 4, 1928, it was 35 cents for adults and 10 cents for children to see the silent film “The Sky Raider.” The first tickets were sold by 18-yearold Catherine Domino, who is Shirley Fedeli’s mother. “Anthony Domino was my mother’s uncle, and when the Capitol opened, she was the first cashier,” Shirley said. That’s not all, Shirley said, “That’s where she met my father, Peter Martignoni.” When it opened, the Capitol had dancing and singing contests, as well as vaudeville acts. One talented dancer was Jo Martignoni, who won several contests there and went on to compete in places like Detroit. Her brother Peter drove her and his mother to the theater, and, well, you can guess what happened.“ (My mother) probably said, ‘Hey, Peter, I’m glad your sister won.’ My mother wasn’t afraid to talk to anybody,” Shirley Fedeli said. Its heyday was a time well before TV when theaters were commonly found in Rockford neighborhoods, including the Rex on Seventh Street, the Family on Broadway, and, later the Auburn on Auburn west of North Main and the Park in Loves Park. South Rockford had two neighborhood theaters – the Capitol and the Rialto, which opened a few months earlier on the same block at the corner of Morgan and South Main Streets. The Rialto was built by Jasper St. Angel and Paul Latino with a similar Spanish motif and seating for 1,200. For years, the two held similar gimmicks to draw customers, such as give away nights with the prizes being dishes or volumes of an encyclopedia. Guy Fiorenza recalled walking to the Capitol with his mother from their home on the 700 block of Montague Street. “To promote off-nights, you would get a plate or a part of a dish set if you bought admission,” he said. “The funny thing is that, often, when the movie was going on, someone would make a wrong move, and they dropped the dish. And all of us would say, ‘ohhhhh,’ in sympathy.” He still has one of those dishes. The Capitol’s ownership changed hands over the years and closed for good in 1958. In time, the front portion was used for businesses, including the Capitol Cleaners, and, more recently, the Latin Billiard Club and Taco Loco restaurant. Although its exterior is not much to look at, many believe the space is salvageable, including noted Rockford architect Gary Anderson, whose firm specializes in adaptive reuse and historical preservation projects. Among his projects is the Prairie Street Brewhouse. Asked if the building could be renovated, he said, “I think so. (In addition to the front), there are apartments upstairs. If you can get this into the right hands, it could work.” Alderman Hervey is hopeful but also aware of the building’s code issues. “There are places where there is water coming in,” she said. “The structure needs an environmental cleanup.” To that, the architect Anderson says, “All of these things are cleanable. There is still a lot of original detail inside that you can re-purpose and recreate. I think the building is definitely worth retaining and restoring.” While aware of the serious code issues, Mark Williams, economic development manager for the City of Rockford said, “We’re actually trying to do an evaluation of South Main Street and determine its cultural value. It is in the new TIF district that encompasses the Barber-Colman Village Block.” (TIF or tax increment financing is a public financing method used as a subsidy for development in community improvement projects). Many of the artifacts from the Capitol are in other places. The theater’s organ is in private hands; the cloud machine is at the Coronado. But many original items are still inside, including signs, wall decorations, aisle markers. Alderman Hervey’s dream is of a multi-purpose facility that, when re-purposed, could become a centerpiece of the neighborhood. “I know it takes money,” said Hervey, who is planning to create a committee to tackle the project. “I want to start a fund-raising campaign. We’re calling it ‘Capital for the Capitol.’ I think there are opportunities to do it. I’m also not expecting it to happen tomorrow. It’s not going to be like the Coronado Theatre. But, as part of the South Main Street revitalization, I think this will resonate with a lot of people.” (Sources: Rockfordreminisce.com; Illinois Digital Archives; cinematreasures.com; Rockfordpubliclibrary.org/local history )