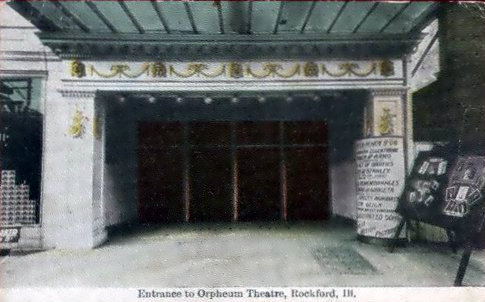 This early Rockford theater, located on N. Main Street, was opened in 1906 as a vaudeville house. It switched over to movies in 1915. The Orpheum Theatre closed in 1937 and has long since been demolished.

Rockford 1900-World War I, by Eric A. Johnson, gives the address of the Orpheum Theatre as 118 N. Main Street. It was converted into a movie house in 1915, after Orpheum vaudeville shows were moved to the new Palace Theatre across the street.

To the best of my knowledge, after the Orpheum was razed a Kress department store was built on the site. In 1985 the Kress building was renamed the “New American Theater” (NAT) and was converted to a 280 seat main-stage thrust theater on the main level and a 100 seat black-box theater in the basement. The building also housed a scene shop, costume shop and storage, administrative offices and rehearsal halls. NAT closed it’s doors in December 2006. The building was purchased by a local businessman who donated a majority of the contents of the building to Rock Valley College’s Drama Department. The building is currently owned by the Rockford Public Library and is rented to area theater groups needing performance space.

This page from Rockford Public Library’s Local History project suggests that the building occupied by Nordlof Center is the same building once occupied by the Orpheum.

A timeline of its history says that it was occupied by a manufacturer of watch cases in 1887, housed the Orpheum from 1912 until 1936, and was occupied by the Kress variety store from 1937 until 1973. It sat vacant after that, and was bought by the City of Rockford in 1984, then sold to New American Theater in 1986.