The Alto Theatre was one of many independent theatres that once lined the streets of Los Angeles. It opened on October 18, 1939 with Gloria Jean in “The Under Pup” & Randolph Scott in “Coast Guard”. It was closed in 1955. It was converted into a chuch which opened on October 9, 1955.

Maybe like the Fox Florence – I think that had a tire store on one side of the building.

An aerial view of this theatre from Terraserver shows a building about 120' deep with frontage of about 180' on Western Avenue. Except for the entrance foyer, the frontage looks as though it was occupied by retail shops to a depth of about 50'. The theatre auditorium looks to have been about 70' wide, and was probably about 120'-130' from screen to back wall. I’d have guessed at over 1000 seats for a place that size.

The style looks art moderne, and the building details suggest an early post-WWII construction date rather than a remodeling of something older. My grandparents lived a little more than a dozen blocks from this theatre in the 1950s, but unfortunately when we went to visit them we almost never drove down Western Avenue, and I don’t recall it. There was still quite a bit of new construction going on in the area about that time, though.

From Live Search it looks like the standard size (800-900 seat) being built during that time. One thing you have to remember is when each theatre in the Los Angeles market had a union projectionist working the booth. The standard contract had if the theatre seated 1-999 seats it was a one man booth per shift, if the theatre seated 1000 & up it was a two man booth. To get one over on the Projectionist union, theatre owners removed x amount of seats from the theatre to go under the seating clause in the contract.

Here is the ad:
http://tinyurl.com/yr5w5x

Here is another Times ad from January 1945. Some theaters were open 24 hours to accomodate the people working in the wartime factories:
http://tinyurl.com/2dbotn

The L.A. County Assessor’s office gives the effective year built for this building as 1940. The “Year Built” space on its page has “0000” in it. Grrrr, missing data!

Six degrees of…
In the 8/11/07 ad, you will find the Alto, the York in Highland Park, and also the Church of the Open Door, the rooftop sign of which has moved over to the UA on Broadway. So it’s a trifecta.

I finally tracked down the Alto in Boxoffice. The issue of August 26, 1939, has this item: “Construction has begun on a new 1000-seat house, to be called the Alto, being built by Milt Arthur, head of Cabart Theatres.”

At that time Cabart, through its Southside Theatres subsidiary, operated the Balboa, Manchester, and Mayfair theaters in the south Los Angeles area.

This opened on October 18th, 1939 and closed in 1955 as a cinema. Grand opening ad posted. Ken C Mcintyre’s link can be seen at 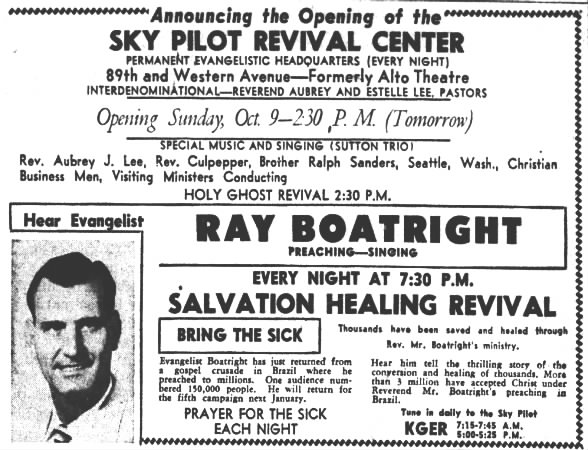