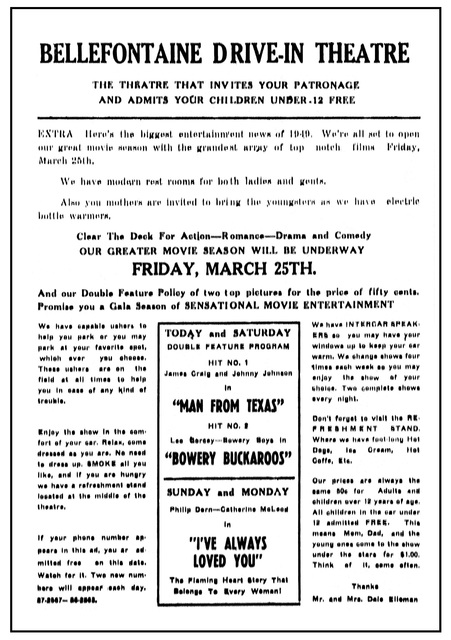 The Bellefontaine Drive-In opened on March 25, 1949, screening the 1948 western “Man from Texas”. The second feature was the 1947 western/comedy “Bowery Buckaroos”. It was opened by Dale Elleman who also will open the New Drive-In Theatre in Belle Center, Ohio, and the Marysville Drive-In, in Marysville, Ohio. Elleman also operated the Buffalo Drive-In, in Tampa, Florida. The Buffalo Drive-In was for black people only.

The parking ramps of the Bellefontaine Drive-In could hold 370 cars with intercar (in-a-car) speakers for each car. During the late-1950’s into the 1960’s it was open in the winter on weekends with in car heaters. Elleman sold the property in July of 1971. He closed the drive-in at the end of season in 1971.

The drive-in was demolished and the Detroit Aluminum and Brass Company (D.A.B.) built a new factory on the site. It is also out of business. The last owner of the property was Dadio Metal U.S. Inc. who manufactured engine bearings. They closed their doors in 2006.