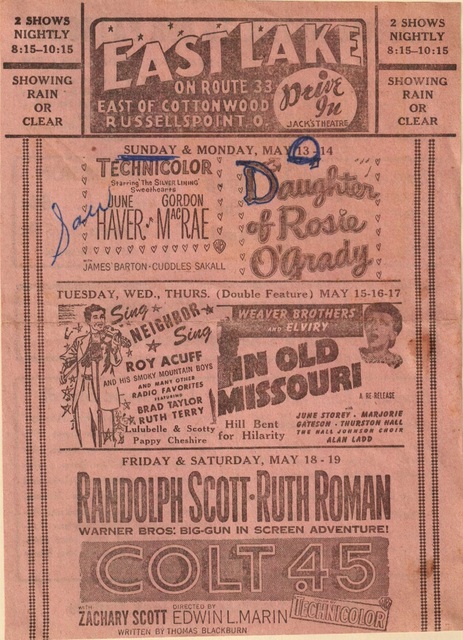 One of Ohio’s earlier drive-in theatres to open was the East Lake Drive-In, located in the Cottonwood area of Indian Lake, Ohio. In the early part of the century, Indian Lake was a recreation area with fishing and boating. It had many waterfront cottages being built primarily for summer time use only. It was also the location of an amusement park with its roller-coaster, other rides and a dancehall. The East Lake Drive-In opened on May 30, 1946, by Tad Smith and featured an 18 ft. x 24 ft. screen tower. It had a car capacity of 250 cars with seats for the walk in patrons. Tad Smith would operate the concession stand and Rex Dyer from Carey, Ohio, was the projectionist for the drive-in. He had a projector mounted on back of his truck along with blast speakers for the sound system. He would drive the truck to East Lake to screen the movies.

Dyer would travel around in the summer time to various small towns in Ohio and screen movies off the sides of buildings. In 1948, Rex Dyer would open the Amanda Drive-In, in Arlington, Ohio. In between 1947-1948, Jack J. Gutilla and his brother-in-law Sam Ventura would take over the operation of the East Lake Drive-In. Gutilla was also operating the Roxy Theatre in De Graff, Ohio.

In 1948, Gutilla reopened the new East Lake Drive-In featuring in-a-car speakers with the latest sound and projectors. In the early-1950’s, he would increase the size of the parking ramps to hold 500 cars. In 1956, Gutilla had to close the East Lake Drive-In because he could not get a new lease on the property. The drive-in was demolished and the property was redeveloped for housing. Jack J. Gutilla passed away in 1961. Thanks go to Pam Bowers (Rex Dyer’s granddaughter) and the Logan Historical Society for all their help and information.

An address that maps better (at least for Google) is 8064 OH-366, Russells Point, OH. A 1959 aerial shows the remains of the drive-in which start from OH-366 and run north to Bell Avenue, and from Waterbury Rd east to Foster Rd.

Today, there is nothing left of the drive-in. http://tinyurl.com/hgfx98m