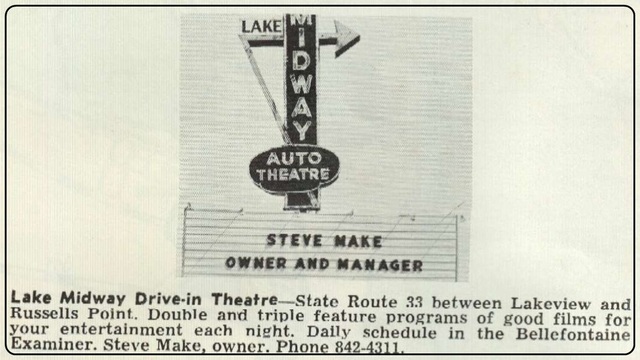 After the closing of Jack J. Gutilla’s East Lake Drive-In, in 1956, there was a need for another drive-in theatre at Indian Lake. Lou Wetzel had vacationed at Indian Lake for the past 20 years and knew the area well. Lou Wetzel, attorney Robert Kelly and Lawrence Kelly from Toledo, Ohio, formed a partnership to build and operate the Midway Auto Theatre. The construction on the new drive-in was rushed and it opened on May 29, 1957, with a free “Get Acquainted Night” with two special features. The grand opening night was on Memorial Day May 30, 1957, screening the 1956 western “Walk the Proud Land” with Audie Murphy, Anne Bancroft and Pat Crowley. The second feature was the 1956 drama “The Boss” with John Payne and William Bishop. The third feature was the 1955 Drama/Romance “Picnic” with William Holden and Kim Novak. It had a car capacity of 600 cars with R.C.A. in-a-car speakers, wide CinemaScope screen and moonbeam lighting.

The auto theatre reopened for the 1962 season renamed as the Lake Midway Auto Theatre. In early-1962, Lou Wetzel and Don Eagle, famous wrestler and descendant of the Mohawk Indians formed a partnership to build the Mohawk Village on 26 acres between Point Russell and Lakeview on Indian Lake. The auto theatre was going to be part of the village along with teepees, a museum for exhibiting Indian relics, a trading post and living quarters. He did have some events at Don Eagles Mohawk Village, but apparently the Indian Village was never fully constructed. The work was to be completed in 1963. Wrestling Revue reported Don Eagle’s death on March 17, 1966, stating that it appeared the Native American had died from a self-inflicted gun wound. Newspaper reports indicated that he had been despondent over some construction project setbacks.

The Lake Midway Drive-In finally closed at the end of the season in 1968 for good. Steve Make was listed on the marquee as the owner and manager so he might have owned it at the end. The auto theatre was demolished and now is the Community Market and Hardware store.

Thanks go to the Logan Historical Society for all their help and information.