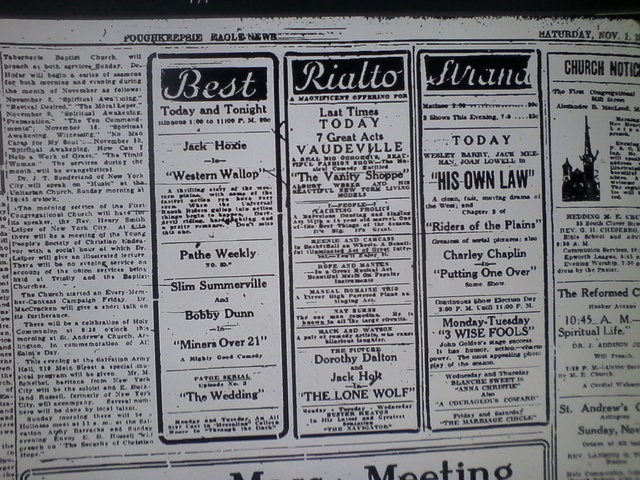 This opened on May 3rd, 1927. Grand opening ad in photo section

This rather puzzling post at Facebook has some history of the Strand Theatre in it. As near as I can glean from the confusing text, the Strand was built in 1921, and might, or might not, have been called the State Theatre originally. In 1949 it was taken over by Paramount and was remodeled and renamed the Colonial Theatre. Another renovation took place in 1968, after which it might, or might not, have been renamed the State Theatre. The building was demolished in 1971 to make way for one of the highways which eviscerated Poughkeepsie and sent it into unremitting decline.

The article features a gallery of 20+ photos but most do not depict the Strand/Colonial. It says that the house changed hands and was opened and closed multiple times over its history. It’s clear that State Theatre was an aka at some point, but whether at the beginning or the end of its history, or both, is ambiguous. What is certain is that at the beginning of 1949 it was operating as the Strand, (and apparently had been, perhaps off and on, since at least 1927, since we have that grand opening ad from that year in our photo section) and at the end of 1949 it was operating as the Colonial.