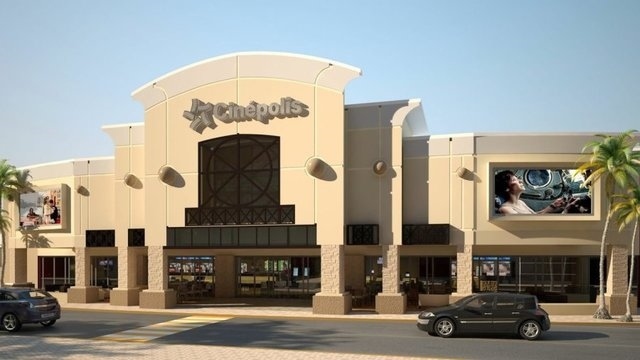 The Mexican chain chose Jupiter as their fourth Forida location and 11th in the U.S. Cinépolis offers gourmet appetizers and entrées, and a full bar which includes wine, spirits, and beers, all served at your seat.

A theater at this location goes back to 1981 when Cobb Theatres opened here with three screens and added five more in 1988 and then six more in 1995. In June of 1997, it was announced in Florida newspapers that Regal Cinemas was buying 67 Cobb Theatres for $200 million. After the Regal acquistion, screen count in 2000 was brought up to 18. When Cobb Theatres lease wasn’t renewed Paragon Theatres took over from 2013-2014.

June 26th, 1992 grand opening ad of the 6-plex expansion (14 screens) in photo section. It was listed as the north theatre and south theatres. It should be noted that the original 3-plex cinema was closed down in 1988.

Photos of the most recent configuration of Cinépolis Jupiter can be seen on this page of the web site of CTMS Architects, designers of the renovation.