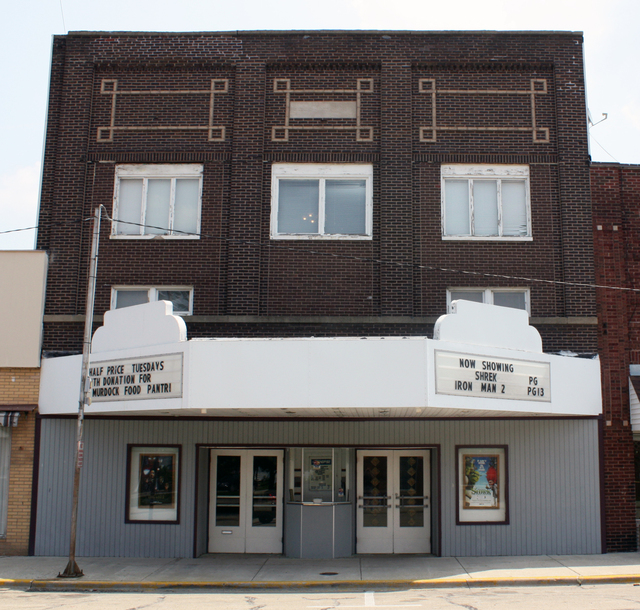 Opened in the early-1920’s as the Star Theatre, it was re-named Gem Theatre in 1940. This downtown Villa Grove theatre was later twinned in the late-1990’s, and renamed the Twin Cinemas. It was operated since 2002 by Sensible Cinemas, and continued to screen first-run features until it closed in 2011.

It has first run movies.

VILLA GROVE â€" When Bill Hayes of Villa Grove was laid off from his engineering job in April, he and his wife, Tana, began looking for a new opportunity.

After the owner of the Villa Grove Twin Cinemas announced the movie theater was up for sale, the Hayeses knew they had found what they wanted.

The couple took over as owners and residents of the theater a week ago.

“It’s huge, and it all had to happen very quickly,” Tana Hayes said.

The Hayeses are operating under the umbrella of the previous owner, who is training them.

“No one’s left us high and dry. They’ve all been wonderful,” she said.

The former manager of the theater, Trisa Martin, has taught them the basics, such as operating the equipment and working with the films. Martin said she was happy to help.

“They are nice people and very family-oriented,” Martin said.

Tana Hayes, 43, had some experience working at a movie theater in her early working days. Her brother-in-law still manages that same theater in Idaho. He also has helped the couple learn the movie theater business.

Bill Hayes, 45, grew up in Oregon living in his family’s grocery store and gas station.

The Hayeses have kept on all of the part-time employees but have added their three children to the operation. The kids help out in the concession stand and sweeping up after the movies.

Bill says their children â€" Katie, 9, Tabitha, 11, and Jackson, 13 â€" are designated members of their board of directors. They consider the theater a new adventure and like living in the apartment above the theater.

The theater still will show current releases. Movies will be scheduled on opening weekends or within a few weeks of release.

Their main patrons are families and senior citizens, so they focus on offering movies for those audiences.

The Hayeses also added a new later 9:30 showing on the weekends for those out-of-towners wanting to come to a show after dinner.

Jason Swearingen brought his family from Tuscola to see a movie on a recent Sunday afternoon.

When he and his wife want to see a movie, he said, they always check the Villa Grove theater first. They like the close location and the affordable prices.

The Hayeses plan to expand their advertising to draw in more customers from the area. They also hope to work more with area schools.

Bill Hayes has registered as a substitute teacher in Champaign-Urbana and other communities to subsidize the family income and have the flexibility to work at the theater in the evenings. He also hopes the school districts will be interested in teaming up with the theater for student outings.

The couple might add a 4:15 show on Fridays and offer occasional free matinees and early showings during school holidays.

They don’t want to get into a lot of gimmicks, he said; just provide good entertainment for all.

It looks like it’s been renamed the Gemini — good name for a twin cinema formerly called the Gem — here is their new website www.villagrovemovies.com

This has closed? no proof online that it is still open.

It is closed. The phone is disconnected and its Facebook page has not been updated in nearly 2 years.