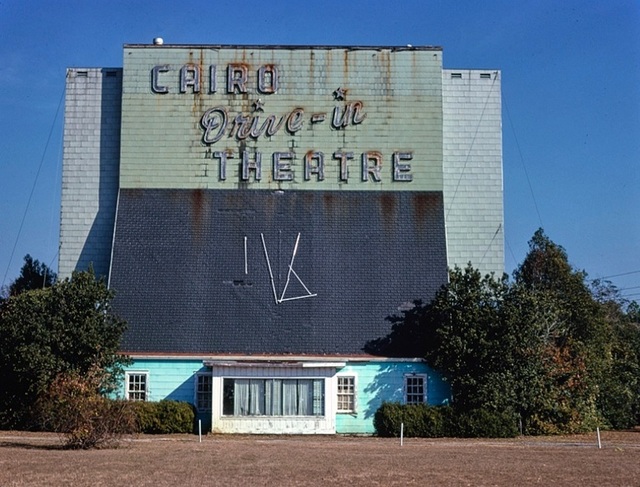 The Cairo Drive-In was built in 1950 by C. Spurgeon Dunn, Ellison Dunn and Jim Camp. It held 450 cars. The screen tower was 60 feet tall and 60 feet wide. When CinemaScope came out, wings were added to the side to make the screen 90 feet wide. The theater was located on 10 acres of land, the drive in occupied approximately seven acres and the rest was landscaped. It had its own greenhouse.

At one time the screen tower was occupied by an outboard motor/boat dealership and service center. In 1963, the drive was purchased by a local car dealer with the intention of demolishing it and building a new dealership on the land. Instead of doing this, he built further down the road and operated the drive-in for about one year, after which he rented it back to the Dunn family. Larry Bearden rented the drive-in in 1978.

In 1984, the land was sold to a developer for the building of a shopping center. During the period of 1978 to 1984, Larry Bearden had a televesion repair shop in the screen tower, along with an office, storage rooms, and a speaker repair shop.

The site is now occupied by a Wal-Mart; however, one pole remains next to the highway which held a driveway light.

Thanks Larry for remembering the Cairo Drive-in.

The above address will map accurately to the location of the drive-in, which is currently occupied by a Walmart.

Here is a 1952 aerial photo of the drive-in, courtesy of Earth Explorer and USGS.

There are several pictures of this drive-in on its gallery page at Drive-ins.com: http://www.drive-ins.com/gallery/gatcair

thanks again for the Great pictures.

That was a fun place to go. Ms Lashley working the ticket booth, and you could always get a Rodenbery Pickle in the snack bar

Approx. address for the drive-in was 361 8th Avenue Northeast.