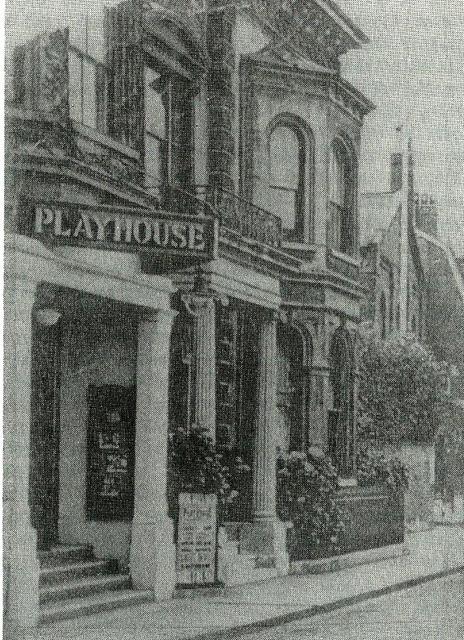 In the Suffolk town of Haverhill, the Playhouse Cinema opened on Wednesday 28th February 1928.

The 400-seat auditorium was built in the large garden behind Chauntry House, the former home of the Gurteen and Smart families. It was owned by the Bostock Cinema Circuit, which promptly acquired the town’s other cinema, the Empire Cinema. The cinema managers were Mr and Mrs J. M. Jennings.

The first presentation was “The Flag Lieutenant”. The cinema entrance was through the tiled hall of the former Chauntry House. The tip-up seats were on a mostly raked floor that was covered with a thick pile carpet.

Painted panel pictures were placed at intervals along the side walls, and there were large bowls of light in the high ceiling. The first night takings were donated to the Nursing Association of St. Johns and Haverhill Branch of the British Legion. The Withers String Quartet provided musical entertainment - and cigarettes were handed around. (Chocolates should also have been given out, but the transport bringing them to the town had been delayed!) By contrast with the Empire Cinema, the Playhouse Cinema had screen and house tabs(curtains).

The auditorium floor levelled out at the front, and there was no carpet for those cheaper seats. This paved the way for an added attraction, dances, held after the front stalls seats had been moved out of the way. These started at 9.30pm and went on until 1.30am, to the music of Reg Maestri’s Rhythmics. There was a stage, but it was not used as regularly as that at the Empire Cinema.

On Friday 19th October 1934 aviator Amy Johnson visited the Playhouse Cinema to see the comedies “Trouble” and “I’ve Got You Covered”. She was staying in the area before taking part in the England to Australia Air Race that started from nearby Mildenhall.

Early in April 1936 the Playhouse Cinema closed for several weeks for extensive alterations and the installation of better sound equipment. The auditorium was extended to increase capacity to 700 seats. It re-opened in the May.

During World War II, at the request of the military authorities, the town’s cinemas were allowed to open on Sundays for servicemen and their friends (they made lots of friends!). The question of Sunday opening for all was raised in November 1947, when the management at the Playhouse Cinema submitted an application, together with a petition with 700 signatures. The council General Purposes Committee agreed to this request, but the full Council rejected that decision. A stormy public meeting on Thursday 27th November voted narrowly, by 283 to 261, in favour of Sunday opening, and this was confirmed by a properly constituted ballot, held on Saturday 13th December, which resulted in another narrow ‘yes’ decision, by 888 votes to 831. The Playhouse Cinema duly opened on Sunday 25th April 1948 with “None But the Lonely Heart” starring Cary Grant. As a concession, most of the Sunday films were old ones (the Cary Grant film was from 1944), there were no advertisements or newsreels and a proportion of the takings was put aside for local charities.

In the 1950’s CinemaScope was installed, together with two new projectors. The 1953 Kinematograph Year Book lists the seating capacity as 585, so presumably some remodelling of the seating was also carried out.

Mr and Mrs Jennings finally retired as the managers in 1970. Roy Farrant, who had worked there since 1936, took over for the remaining years.

This was the time of the controversial ‘X’ certificate films. Ken Russell’s “The Devils” came in for special treatment, with vehement protests and filmgoers running the gauntlet of pickets outside the cinema.

But by now the auditorium was getting very shabby, and business slowed down. The inevitable end came on Saturday 31st March 1973 with Twiggy in “The Boy Friend”.

Protests greeted the plans to turn the cinema into a bingo hall, but the subsequent Coronet Bingo Hall proved a great success. However, even this ceased in 1985.

The greater part of the auditorium was demolished to make way for a new shopping centre, but the entrance, through Chauntry House, remains in retail use.