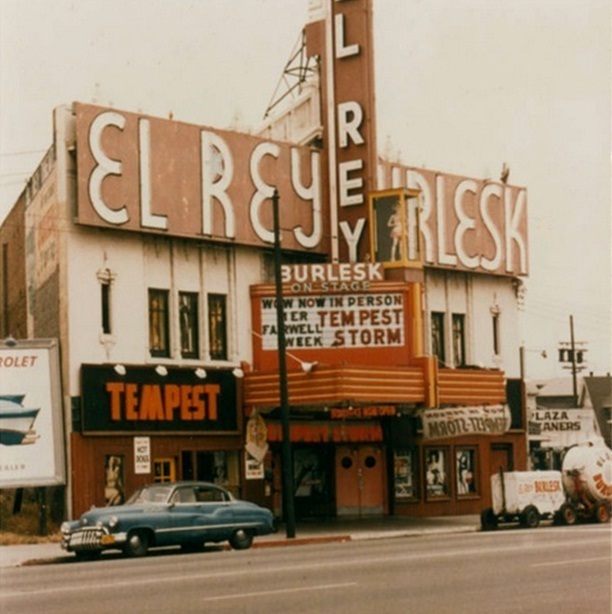 Wow, your dad was a projectionist there? That’s so cool! My father was taken to the El Rey in 1954 for rushing by a Cal fraternity. Tempest Storm performed, and he says she “did it with the curtain”. He didn’t end up joining the fraternity, but still remembers that night vividly (for obvious reasons). Recently, my aunt brought her “boyfriend” (who is in his 70’s) over to my house. He saw my poster for the Irving Klaw movie, Teaserama (starring Tempest Storm), & we got to talking about it. He played saxophone in various nightclubs & strip joints in the 1940’s-50’s, so he was quite familiar with all the local places. According to him, the El Rey, Moulin Rouge, etc. were where he got his “education.”

Anton LaVey was playing organ there at the time Russ Meyer made his French Peep Show movie.

A 1957 photo of the El Rey from the Oakland Public Library.

Pete De Cenzie, the gentleman who guides the destinies of Oakland’s El Rey theater, called to
our attention the fact that his theater was only closed for one right, two weeks ago when Miss Evelyn West was deemed by the police department to be a little TOO generous with her “treasure
Chest” exhibitions. Says Mr. De Cenzie, “That whole matter was straightened out at once. But people evidently had the impression that we had been shut down permanently. Nothing could be further from the facts. Right now we are featuring a movie called â€œCrimes of the Gestapoâ€ and a stage show with Vallkyra who although she is six foot three qualifies as being exotic.”

Here is an April 1950 ad from the Oakland Tribune:
http://tinyurl.com/25xsfc

Prior to The El Rey Theater operating on a burlesque format, it was a movie theater featuring films that were less than new releases. As an enticement to patrons, they gave away one piece of chinaware to all women patrons on Monday Nights. You can collect a whole set if you frequent the theater during the promotion period. S. Taw

This for Robert Campbell. I danced at the El Rey beginning in the fall of 1949 as Colette the Beaucoup Girl.I also worked in skits with the two comics, Bruce & forgot the other chaps name. His wife was Bonnie. I couldn’t sew (I was on the college track @ El Cerrito High & not yet 18)so I became the 1st stripper (other than Lily St. Cyr) to strip out of street clothes. I became Jackie the Coed.I don’t recall your dad but I sure remember the ugly “butcher” Charlie who sold the french photos & crackerjacks! And of course, Pete D.& his lovely blonde wife, Yvonne. The Follies brought me to LA & Temptest was sent to the El Rey, a much smaller venue. Before she left LA, I did watch her being taught to walk the T-Bar by Miss Lillian Hunt. A few years back I ran into Tempest @ Neiman Marcus in Newport Beach. Now she works the retirement communities but has sever sight problems. Still red-heades and busty!

@jackiethecoed. Thank you for the great story! My dad Charles “Eddie” Green, sadly passed a few years ago. He would have enjoyed your reply. He used to live at the Roxy Hotel up the street from the theater. One hot summer day, he decided to walk to the El Rey without a shirt, and got arrested for indecent exposure. Yvonne bailed him out.

It appears that this theater was only called World Theater for two years — shouldn’t it be listed here as the El Rey, the name it held for the longest time, and what it was called when it closed?

I live about a mile away from the site of the El Rey. It was demolished years ago for I-580, which connects the San Francisco Bay Bridge with Oakland and suburbs to the east. Historically our neighborhood of West Oakland was the “Harlem of the West,” home to a thriving African American middle class supported by the Pullman Porters union and the Port of Oakland. Across the street from the El Rey/580 still stands the California Hotel, now Section 8 housing but in the 50s one of the only four-star hotels west of the Mississippi you could stay at if you weren’t white (and all the great entertainers stayed there). A neighbor of mine was doing some work on his house and in the walls he found fragments of movie posters from 1929/30 from the Plaza Theater, which I’ve since learned was the El Rey’s original incarnation.