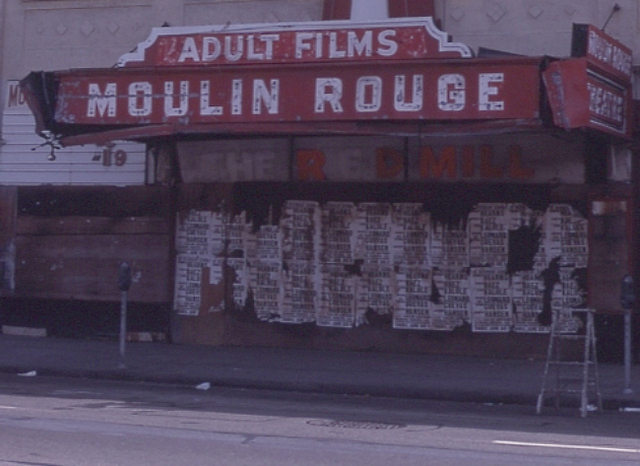 Uh, David Boelke—-it was Gary Parks who mentioned the windmill.

In the late 1990’s the windmill sign was taken down by an antiques/junk/etc. dealer who then put it out for sale on his lot on 5th St. I went to take photos of it, & asked about buying it. He wanted a 4 or 5 figure amount, way out of my budget. Sadly, all I came away with that day were some pictures. As far as I know, he was unable to sell it, & within a year or two, his business was closed. I am very curious to know what became of the windmill. The sign was not in working order, but definitely could have been restored to its former glory. I also have one picture of it when it was still on the front of the the theatre, which I took sometime in the mid-1980’s. If anyone would like to see these pictures, let me know & I will scan & e-mail them.

On page 84 of ‘Oakland’s Chinatown’ by William Wong (from Arcadia Publshing’s Images of America series), there is a 1958 photo of the block on 8th Street where the Moulin Rouge stood. Although the theatre is in the far right-hand corner of the photograph, one can get an idea of what it looked like, windmill sign & all.

i remember as a kid walking by the moulin rouge. It was called “the red mill” and had a delapidated looking mill, which did not turn but was barely lit in blue and white. Passing by you could smell the odor or urine and at that time there were a lot of low budget hotels, the theatre was in the skid row section off of Washington and 8th. Lots of hobos and drunks. My dad said when he was a sailor he would go there and to the El Rey.

I remember the Moulin Rouge as a rather seedy burlesque house on 8th Street in skid-row Oakland in 1962. I was a student at men-only St. Mary’s College in Moraga; several of us, driven by hormones, would cruise Oakland looking for hookers, and at least once went inside for a burly-Q show. I don’t remember the show as particularly titillating – Tempest Storm was NOT on stage that nite – but I do remember – and cherish – the sort of seamy atmosphere of the theater and the neighborhood. Great stuff!

It was in derelict condition then, but back in the late 80’s when I lived in Oakland, I was quite taken by the ruins of the Moulin Rouge and wondered what it was like in its heyday. Somewhere I think I have some photos of it from that time.

I also have just unearthed a TV news report that briefly shows the theatre, in the abandoned state it was in at the time, in the late 80’s:

By the way, the view that comes up (at least as of June 2014) in the Google map street view above, is across from the Moulin Rouge. Just drag your mouse to see the actual location across the street.

According to Google Street View in 2016, the building is still there, renovated quite nicely and converted to retail.