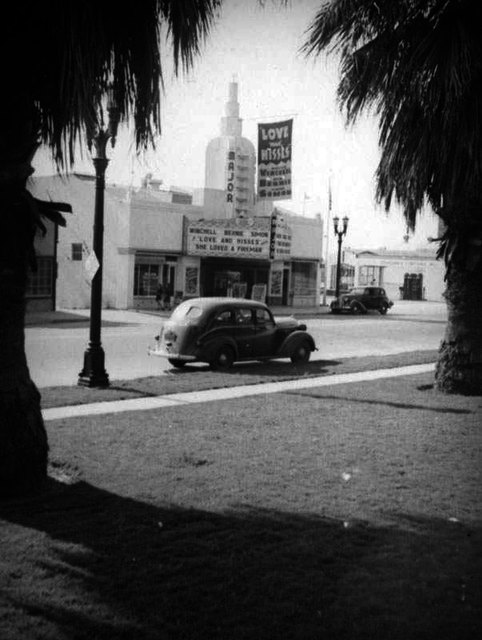 The Major Theatre was one of the neighborhood theaters that once was located in Burbank. It was operating by 1938, and continued until 1962/63 when the interior was damaged in a fire.

The Major is mentioned in this Burbank retrospective:
http://tinyurl.com/5k2jsk

Here is an October 1955 item from Boxoffice magazine:

Fred Stein, who recently purchased the Major in Burbank from Sid Pink and asssociates, has appointed Larry Marcus manager of the house. Meanwhile, Pink has taken over the Grand in Anaheim, which in recent years has been open two days a week, specializing in Spanish-language films.

â€œIt Came from Beneath the Seaâ€ deals with a monster jet propelled from the oceanâ€™s depth by an H-bomb to attack the world. â€œCreature with the Atom Brainâ€ is a drama of men who return from the dead via the power of the atom.

It must’ve been just a couple of doors down from the Loma. Both are now gone, swallowed up by tacky condos.

If the “North” part of the address is right, it’s about four blocks from where the Loma was. But the zoning info for that building (still officially listed as 331 N. Golden Mall, which is what that section of San Fernando Blvd. was called for a while) indicates that the building’s still standing.

It looks like that address was already converted to retail in this 1967 shot, between Kay jewelers and Penney’s:
http://wesclark.com/burbank/palm_ave_worker.jpg

Oh, and the address is correct, therefore it’s still standing. The 333 address is still used for a tiny storefront in between the two halves of the old theatre, last used for a booth selling and buying jewelry. It may have been the box office. There’s terrazzo on one side for a shoe store that looks early 1960s vintage, so the Major Theatre probably didn’t survive past the 1950s. A couple aerial views from the photos found in the 1959 time capsule opened in 2009 show a small neon tower on the roof.

Here’s a page of a 1950s directory that confirms the address: http://wesclark.com/burbank/abc_directory/005.jpg

A photo of the lobby of the Major Theatre appears on this page of Boxoffice Magazine, January 8, 1938.

Apparently it closed after a fire broke out in 1962 or 1963, severely damaging the interior.