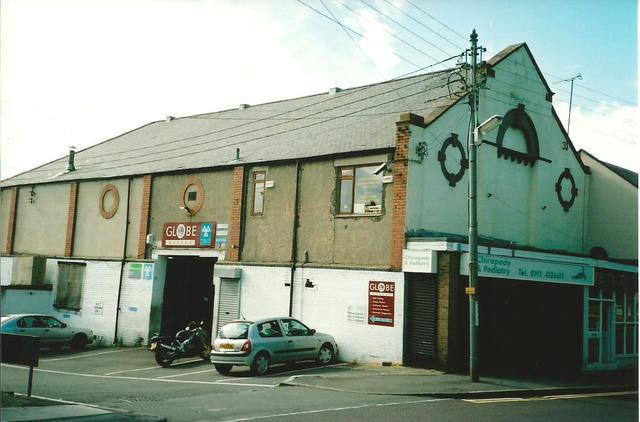 In the small town of Crawcrook, County Durham, the Globe Electric Theatre was opened in late-April 1912 by the Charlton family of builders and contractors. It was built of brick, with a slate roof and ornate frontage.

The auditorium was 54ft in length, and there were 620 seats (460 in the stalls and 160 in the circle). Stairs to the circle were at either side of the central pay box, with a set of double doors to the stalls at each side of the entrance foyer. It was described as a “handsome and commodious” cinema

The Globe Electric Theatre was proud of its “elaborate system of overhead heating”, its electric ventilation fans and its electric lighting, “generated from our up-to-date plant”.

In January 1926 it was leased to the Stanley Rogers (Hinge) circuit. In the 1920’s, seats in the circle cost 2d, and each child received a coloured comic, an apple and an orange. In the stalls, seats were 1d, but no orange was handed over.

The Globe Electric Theatre was operated from January 1938 by J. H. R. Siddle’s Hyco Cinemas and from May 1959 by Atherley Heslop of Stocksfield, by which time it had become the Globe Cinema, with seating reduced to 427.

It closed in 1960. The building was converted into a garage and shops. More recently, Globe garage (in the rear) has been joined by Cummins Chiropody & Podiatry (at the front).