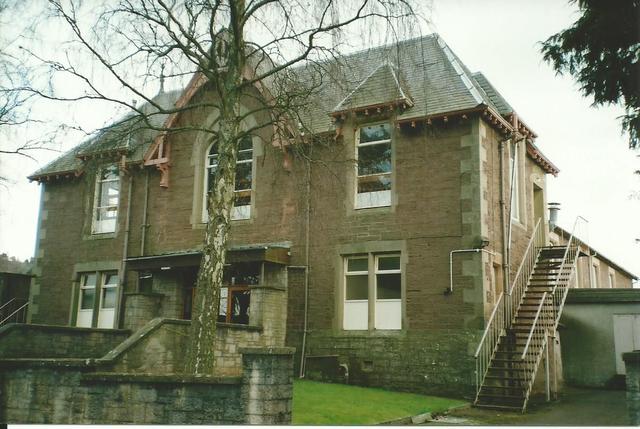 In Crieff, Perth & Kinross, I have been unable to trace the origins of Porteous Hall. Events at the Hall listed on the internet include a “grand exhibition and bazaar”, in aid of the fund for renovating the organ of St Columbus' Episcopal Church, Crieff, in August 1890.

The Hall was also used for live performances, including “The Eves”, in September 1916, in aid of the Scottish Red Cross, and a double bill of “Ayont the Hill” and “The Scarecrow”, by The Scottish National Players, on 14th November 1930. There might well have been bioscope performances in the very early years of cinema.

More recently it was acquired by Morrison’s Academy, a private school, for use as its refectory.

In 1959 J.B. Milne transferred ownership of the Ritz Crieff and Alhambra Dunfermline to Caledonian Associated Cinemas who in turn gave J.B. Milne the Playhouse Montrose and the Playhouse Peterhead thus ensuring neither circuit was competing in the same time. The deal gave Milne two excellent additions to his circuit while the Alhambra Dunfermline soon became an important bingo club for CAC who later disposed of the Ritz Crieff which was inferior to their Crieff Cinema.

Above should read “neither circuit was competing in the same TOWN”.