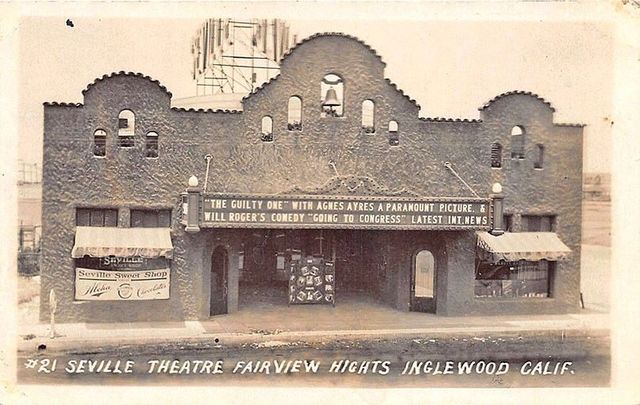 Located at Redondo Boulevard and W. 64th Street, the Seville Theatre opened on February 8, 1924 with a program consisting of “Judgement of the Storm” starring Lloyd Hughes, a Snub Pollard comedy and “My Boy Will”. The Seville Orchestra was conducted by Charles Beresford, and Lucille Ricksen and other stars appeared ‘In Person’. Soon after opening an Estey organ was installed. Programing silent movies, Tuesday nights were taken over by ‘High Class Vaudeville’.

Designed and built by a local company General Construction Company in a Spanish Mission style, there was a large Mission style bronze bell on the Redondo Boulevard exterior which was illuminated at night. There were vines and foliage, and the lobby floor had an unusual treatment with the effect of ‘stepping stones with moss in between’. The theatre had ‘mechanically controlled’ air conditioning. It was operated by Bernard F. Robison.

Later taken over by the Fox West Coast Theatres chain, it operated until at least the early-1950’s.

Here is an excerpt from the lawsuit I mentioned back in December 2006:

Suffice it to say for the present that what the plaintiff is complaining of is that the Seville Theater was arbitrarily removed from one zone to another, and that by reason of such changed zoning she had been damaged because of her inability to secure first and second run pictures, ad theretofore, but was compelled to secure them in accordance with the new zoning. The Seville Theater was located at the extreme northeast corner of the city of Inglewood. Inglewood is bounded on the north and east by Los Angeles City. We may ignore a cemetery which forms a part of the cast boundary of Inglewood and lies between the boundaries of the two cities. Thus, the Seville Theater is at the point of a wedge extending about a mile and three-quarters into the side of Los Angeles City. The Seville is located in residential territory. There is nothing to distinguish the territory in the city of Los Angeles from that in the city of Inglewood other than the street marking the boundary between the two municipalities.The plaintiff and her husband, who was her business partner, selected the location of the Seville Theater, which was built for them and purchased by them in February of 1924 because of its favorable position with relation to zoning. The Seville Theater was able to secure motion pictures at the same time — that is, first or second run — as in the downtown theaters in Inglewood, the Inglewood Theater, and later the Granada Theater, which was opened in the fall of 1924, the former 1.83 miles away and the latter 1.73 miles away from the Seville, but separated from each other by only a block. The nearest theater in Los Angeles City was the Rivoli, 2.95 miles distant from the Seville. Subsequently another theater, the Carlton, was opened in the fall of 1924 in Los Angeles 2.30 miles distant from the Seville, and .65 miles south of the Rivoli, both being located on Western avenue. By the zoning system in force at the time the Seville was built, it was enabled to secure first run pictures before the Rivoli or any other theater between the Seville and the larger downtown theaters in Los Angeles, some 10 miles distant. Later the Mesa Theater was built in Los Angeles City at the corner of Slauson avenue and Crenshaw boulevard, distant .75 miles from the Seville, and opened April 15, 1926. The Mesa seated 1,700 and the Seville 786, the Rivoli between 900 and 1,000, the Granada 1,000, and the Carlton about 1,200. Thus, after the Seville was opened, theaters having four times its seating capacity were opened in that vicinity. When the Mesa Theater was building, the zoning committee of the producers and exhibitors decided that the Mesa and Seville Theaters were competing theaters and put them in the same zone so that they could compete on equal terms. This arrangement was protested by plaintiff’s husband, who was managing the Seville Theater, but his protest was overruled.

The Seville was in the LA Times theater guide in April 1950. Click on the guide for a better view.
http://tinyurl.com/c4ds6e

I think the Seville was located in the now empty lot across from the church I photographed a while. We all agree that the church is not the former theater. The Christian Life book store seen in the Google photo corresponds with an article in the LA Times in 1925 about a new market building being constructed immediately adjacent to the Seville.

My Grandmother owned a Boarding house on Grace West of Hillcrest in Inglewood throughout the 50s (not the 60s)and often took me along when she shopped at Stegs Restaurant Supply on West Blvd. The building was cavernous and oddly-configured for a warehouse so it was likely the old theater location.

The L.A. County Assessor says the building on the southwest corner of West Blvd. and 64th Street (that would be the church) was built in 1994. The building facing West Blvd. north of 64th Street dates from 1941. The Seville Theatre has undoubtedly been demolished.

Thanks Joe. That should end the speculation about which building was the theater.

This is a 1972 aerial photo. There is a building on the southwest corner that was replaced by the church that I photographed a while ago.
http://tinyurl.com/ylzxnnv

I can tell you for a fact it has. I grew up at 3612 w 64 st. right behind the theater in the house on the alley. Steg’s moved to Hawthorne in 1972 and the building was damaged in 1970’s earthquake. I went to the Mesa to see the Guns of Navaron as a kid.

My recollection of the (closed) Seville is that in the same building there was a shoe repair shop and a small cafe just south of the Seville and attached to it. There were a very few stools and booths. The booths were high backed wooden affairs, as I recall. Very tiny place and I only had lunch there a couple of times with my aunt. She also knew the shoe repair man, Mr Thon. This happened about 1952-ish. Does anyone remember these 2 businesses?